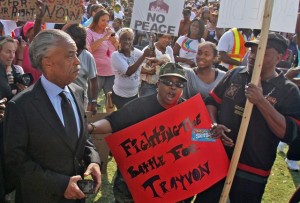 (PHOTO: Rev. Al Sharpton speaks at a rally after the shooting death of Trayvon Martin in Sanford, Florida on Thursday, March 22, 2012.)

Thousands of people descended on Fort Mellon Park in Sanford on Thursday night, to join their voices with a purpose, and to hear the Rev. Al Sharpton give one of his trademark impassioned speeches.

Sharpton took the podium nearly an hour into the rally and stirred the crowd.

“Twenty six days ago, this young man Trayvon Martin … went to the store for his brother. He came back and lost his life,” Sharpton told the cheering crowd. “Trayvon represents a reckless disregard for our lives. Enough is enough. Zimmerman should have been arrested that night. You cannot defend yourself against a pack of Skittles and iced tea.”

Sharpton said he was angry at the handling of this case, and frustrated that George Zimmerman, the man who shot Trayvon, had not been arrested.

“Don’t talk to us like we’re stupid! We love our children like you love yours,” Sharpton said. “Lock him up!”

Fighting back tears, and looking scared and nervous, Fulton started with a Bible verse.

“I stand before you today not knowing how I’m walking right now because my heart hurts for my son,” Fulton said. “Trayvon is my son. Trayvon is your son. Thanks so much for your support.”

Tracy Martin described his son as a “poeple’s person” who did not deserve to die.

Then Sharpton pressed the crowd to raise money for Trayvon’s cause.

Several elected Florida officials were present, and each took a turn addressing the crowd before Sharpton was scheduled to speak. U.S. Rep. Corrine Brown was one of the first to address the crowd Thursday night. She rallied the crowd by yelling, “I want an arrest, I want a trial.”

The she asked the crowd: “What do you want?”

And the crowd responded, “We want an arrest!”

Sanford Mayor Jeff Triplett pledged to the crowd that he was committed to finding justice in Trayvon’s slaying.

Some in the crowd jeered at Triplett while he was speaking. Brown then took the podium and called Triplett back up, demanding the crowd pay him the respect she said he deserves.

“I called him Monday night and told him I need you in Washington tomorrow,” Brown said. “And he flew four hours to get there. Let’s give respect where it’s due.”

Just as the rally was getting under way, news came that Florida Gov. Rick Scott and Attorney General Pam Bondi appointed a special prosecutor to investigate Trayvon’s shooting death, removing the state attorney who had been considering the case.

Scott and Bondi appointed State Attorney Angela B. Corey, whose office handles cases in Duval, Clay and Nassau counties. Brevard-Seminole State Attorney Norm Wolfinger relinquished the investigation after a talk Thursday with Scott and Bondi, according to a statement from the governor’s office.

That news followed a day of other developments in the handling of the case.

“My role as the leader of this agency has become a distraction from the investigation,” said Lee, brought down by a firestorm of criticism over the shooting death the unarmed 17-year-old.

Darren Jones, an Oviedo, Fla., resident who attended the Sharpton rally, said he attended Lee’s earlier press conference and asked, “If the roles were reversed, would we be here today?” The chief didn’t answer his question, but he’s certain that, “the answer is (Trayvon) would have definitely been arrested.”

While the crowd was gathering across town at Fort Mellon Park, news came that the chief had stepped down, and hundreds of people erupted into a spontaneous roar, chanting, “the chief is gone; Zimmerman is next.”