Thomas scores 26 points, 20 in first half, to lead Ohio State past Cincinnati 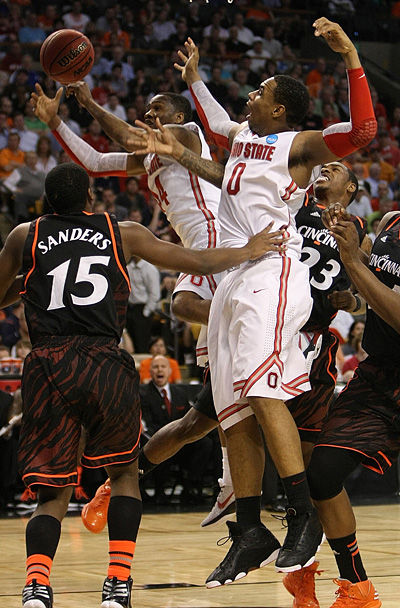 BOSTON — Ohio State forward Jared Sullinger admitted his home state probably is crazier about football than his sport of choice.

But that wasn’t likely Thursday night.

(PHOTO: Ohio State’s Jared Sullinger (0) and William Buford go up over the Cincinnati Bearcats for a rebound during the first half of their NCAA Tournament East Region game at the TD Banknorth Garden in Boston, Massachusetts, on Thursday, March 22, 2012.)

Two of the four Ohio teams in the NCAA tournament’s Sweet 16 met at TD Garden for a clash that has happened only twice in the last 50 years.

If it takes another 50 years for the next meeting, Sullinger and forward Deshaun Thomas made sure Ohio State earned some serious bragging rights with its 81-66 victory over Cincinnati in its East Region semifinal.

The pair combined for 49 points and 18 rebounds to stave off a Cincinnati comeback attempt and push Ohio State (30-7) into a meeting with top-seeded Syracuse on Saturday night in the Elite Eight, the Buckeyes’ first appearance since 2007.

Thomas threatened to take some of the spice out of the much anticipated meeting. The Buckeyes forward scored 20 of his 26 points in the first half to help Ohio State to a 37-25 halftime lead.

“When you have somebody like Deshaun who can post the basketball, score off jump hooks, hit the open shot at the 3-point line, and he pretty much catches everything that you throw at him, he makes me look a lot better than what I am,” Sullinger said. “It makes it so much easier for me to find Deshaun because nobody knows where he’s at but me.”

Cincinnati clawed back to take a 52-48 lead on Yancy Gates’ three-point play with 11 minutes, 34 seconds to play.

Sullinger, who announced he would skip the 2011 NBA draft and return for another season after Ohio State’s loss in the Sweet 16 last season, had 23 points and 11 rebounds.

In an anticipated matchup against Sullinger, the 6-foot-9 Gates was limited to seven points, in part because the Bearcats had trouble getting the ball to him, coach Mick Cronin said. Cincinnati committed 18 turnovers, compared to Ohio State’s 11.