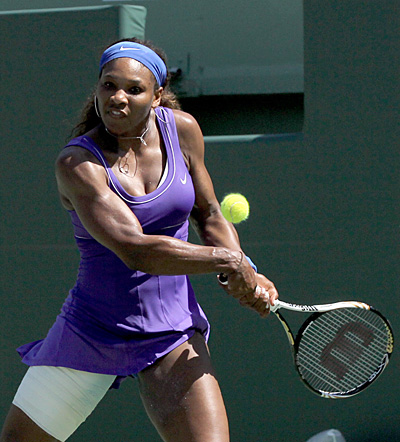 KEY BISCAYNE, Fla. — The last time South Florida tennis fans saw Serena Williams play at Key Biscayne was three years ago, and it wasn’t her proudest moment. She was No.?1 in the world then, but admittedly didn’t look the part. She was hobbling on a bum ankle, had her left thigh heavily taped, was spraying balls into the stands, and lost the Sony Ericsson Open final in straight sets to then-unheralded teenager Victoria Azarenka, who recently vaulted to No.1.

Thursday afternoon, Williams returned to the same stadium in a deep purple dress that matched the court, and this time, she looked every bit the five-time tournament champion she is. Her right thigh was taped “as a precaution,” but she moved well, overpowered 171st-ranked wild card Zhang Shuai of China with her blistering groundstrokes, and rolled into the third round with a 6-2, 6-3 victory.

Williams improved her record here to 53-6. She was playing her first WTA match since losing to No.56 Ekaterina Makarova in the fourth round of the Australian Open in January. She had been hampered by an ankle injury, and took time off to rest. She admitted she was “a little nervous for whatever reason” at the start of Thursday’s match.

“Last time I played I played horrible,” said Williams, who is No.?11. “My worst fear actually was hitting the ball in the stands. I told myself, ‘As long as I don’t hit a ball in the stands, I’ll be good.’ I didn’t do that today, so it worked out well for me. I haven’t played here for so long and I wanted to do well.

“I was really nervous out there. I think now that I’ve gotten one under, I will be better.”

Williams said she drew inspiration from her older sister, Venus, who won her opening match a day earlier after a six-month hiatus. Venus Williams, 31, was diagnosed with an auto-immune disease, has a restricted diet, and tires easily.

“She’s been through so much, and to know you can go through that and continue to play and never give up really gave me hope and inspiration,” Serena said. “Because I felt like at some points I would give up, and she never did. She just really inspires me. And not just in tennis but in life in general.”

She laughed about the fact that the two grown siblings remain roommates in their Palm Beach Gardens mansion as they were as little girls in the projects of Compton, Calif.

“Yeah, we probably should have moved out a long time ago,” she said. “Honestly, it’s ridiculous now, like we have kind of held each other back. Hey, we’re in for the long run. That’s like my husband. We’re always laughing together. You know, I tell her everything, so it’s fun.”

Second-ranked Maria Sharapova had to work much harder than Williams to get past her first opponent. She faced Shahar Peer, a tough-as-nails counterpuncher who served in the Israeli Army, excelled at riflery, and didn’t seem rattled by Sharapova’s strength or her high-decibel shrieks. Peer’s ranking dropped from a career-high 11 last January to No.?55 due to injuries, but on Thursday she looked like her old self.

Peer won the first set, and fired up the upset-minded crowd, before Sharapova rallied to take the match 4-6, 6-3, 6-3. Sharapova overcame 12 double-faults and saved 10 of 13 break points in the 2 hour, 24-minute match.

“She’s a pretty tough opponent, especially for a first round,” said Sharapova. “She’s someone you usually see being a seed in these types of events. She makes you hit so many balls. It’s always a very physical match against her. In the beginning I was a bit sluggish, didn’t feel like I was moving my feet very well and she was controlling most of the points…You have to be aggressive in order to win against her.”

“He’s very talented,” Federer said, “and I’m sure he’s going to be making his move up the rankings very easily this year and in the coming years. He has a big game.”

Second-seeded Rafael Nadal plays his opening singles match Friday night against Santiago Giraldo of Colombia, and got a warm-up with a doubles match on Thursday. Nadal and fellow Spaniard Marcel Granollers beat Croatians Marin Cilic and Ivo Karlovic 6-1, 6-3. Nadal is one of many big names playing on Friday, along with Azarenka, Andy Murray, John Isner, Venus Williams and Petra Kvitova.