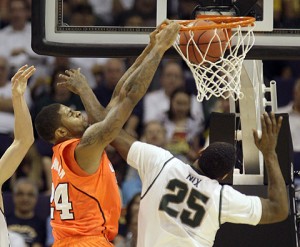 Tony La Russa and Albert Pujols asked for seats behind home plate but settled for two near courtside.

There was plenty of buzz in advance of Thursday’s NCAA West Regional semifinal game at US Airways Center.

In the end, though, taking Louisville’s best jab was just too tall an order.

Led by 6-foot-11 center Gorgui Dieng’s inside presence and seven blocked shots, No. 4 Louisville ran away with a 57-44 victory over top-seeded Michigan State.

Louisville (29-9) advances to face the Florida-Marquette winner Saturday for a spot in next weekend’s Final Four in New Orleans. Michigan State ends the season at 29-8.

“It was a bad matchup for us,” Michigan State Coach Tom Izzo said.

Dieng didn’t just block seven shots — he affected several others as Michigan State made only 14 of 49 attempts (28.6 percent).

Izzo knew it might be a long night when Dieng, with the shot clock winding down in the first half, made his first three-point shot of the season.

How many had he attempted?

“I was wide open and I took it and it went in,” the sophomore from Senegal said.

Last week at practice, Dieng asked Coach Rick Pitino if he could take three-point shots in a game.

After a brutally ugly first half, in which Louisville led 23-18, the Cardinals took control and found some offensive rhythm.

Louisville doubled its halftime lead at 35-25, although Michigan State had one last spurt left. The Spartans answered with a 6-0 run capped by Draymond Green’s emphatic dunk at the 11-minute mark.

Louisville, though, quickly responded with a seven-point run that chased the lead back to 11.

The Cardinals built the lead to 13 with 6:10 left on a Peyton Siva jump shot. Kyle Kuric’s three-pointer, with1:08 remaining, pushed the margin to 15 and put an exclamation point on the night.

“We ran out of gas a little bit, emotionally, mentally and physically,” Izzo said. “And Louisville had the gas.”

Chane Behanan led Louisville with 15 points. The Cardinals shot only 38 percent for the game (21 of 55) but made nine of 23 three-point attempts.

Brandon Wood led Michigan State with 14 points, and Green had 13 points and 16 rebounds.

The second half was a lot easier to watch than the grind-it-out first.

This wasn’t Michigan State’s first NCAA wrestling match. In the 2000 national semifinals, Michigan State led Wisconsin, 19-17, at the half.

The difference: Michigan State slugged out a victory that night and, two nights later, beat Florida to win the national title.

Thursday’s game was 5-3 at the under 12-minute television timeout.

Green, the only player to record two tournament triple-doubles since the NCAA started recording assists, clanked his first three shots before hitting a jumper.

Both schools entered with defensive reputations. Louisville gave up 61.1 points a game, while Michigan State yielded 59.4.

Michigan State rallied to win the Big Ten after starting the season 0-2.

“No one thought we were going to be anything,” said Green, the Spartans’ senior. “We couldn’t ask for a better year. We could have asked for a better ending, but…”