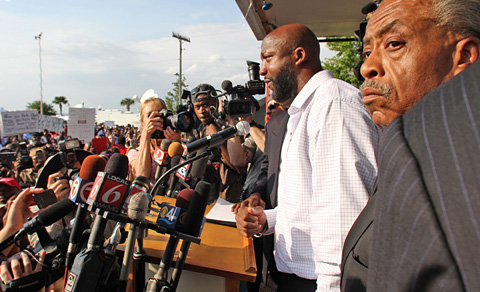 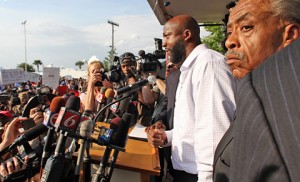 SANFORD, Fla. — The aftershocks of Trayvon Martin’s killing continued to reverberate Thursday from Sanford to South Florida, as the embattled police chief and state attorney overseeing the investigation stepped down hours after more than 1,000 Miami-Dade high school students staged a walkout to protest the lack of criminal charges in the case.

(PHOTO: Tracy Martin, father of Trayvon Martin, left, and Rev. Al Sharpton, right, speak to activists at a rally after the shooting death of Trayvon in Sanford, Florida on Thursday, March 22, 2012.)

The governor’s news was welcomed with boisterous cheers by thousands of people gathered in a Sanford park to attend a rally with the Rev. Al Sharpton, who led the event despite the death of his mother. Flanked by Trayvon’s parents, Tracy Martin and Sybrina Fulton, the celebrity civil rights activist said Sanford Police Chief Bill Lee’s decision to temporarily step down was not enough.

George Zimmerman, 28, was the neighborhood watch captain at the Retreat at Twin Lakes, a townhouse complex in the small town north of Orlando. A Hispanic former insurance agent with a history of reporting the presence of black men to police, Zimmerman shot Trayvon in the chest on Feb. 26. The killing came after Zimmerman called police saying he saw someone in a hoodie walking too slowly in the rain, peering at houses. After the shooting, he told police he was attacked and fired in self defense.

A general studies major at Seminole State College, Zimmerman was kicked out of the school Thursday “due to the highly charged and high-profile controversy,” the school announced.

The Sanford Police Department is under fire for its handling of the investigation and for accepting the shooter’s self-defense claim. Accused of lying to reporters and Trayvon’s parents, protecting the shooter and ignoring key witnesses, Lee decided to step aside Thursday. His decision came a day after a 3-2 Sanford city commission vote of “no confidence” in the chief.

“As a former homicide investigator, career law enforcement officer and a father, I am keenly aware of the emotions associated with the tragic death of a child,” Lee said at a brief press conference. “While I stand by the Sanford Police Department, its personnel and the investigation that was conducted in regards to the Trayvon Martin case, it is apparent that my involvement in this matter is overshadowing the process. … I do this in the hopes of restoring some semblance of calm to the city, which has been in turmoil for several weeks.”

Two captains will run the department until an interim chief is chosen, City Manager Norton Bonaparte Jr. said. It was unclear whether Lee planned to return to the $102,000-a-year post.

On the job for just 10 months, Lee joined the department after a 27-year career at the Seminole County Sheriff’s Office with a mission to clean up a department marked by internal turmoil and race-related scandals.

Trayvon’s mother, who works at the Miami-Dade housing authority, called the chief’s move a “temporary relief.”

“I still say we need an arrest,” she said.

The relationship between the boy’s family and police deteriorated from the start. Trayvon’s family believed the police department deliberately covered up Zimmerman’s past arrest record, portraying him as having a clean record because he had no convictions. The family filed a lawsuit to force the department to release 911 tapes in the incident, but felt the department was eager to release information that was favorable to Zimmerman.

Witnesses whose account differed from Zimmerman’s said their calls were not returned, and it was Trayvon’s dad who discovered a key witness, a girl who was talking to Trayvon on the telephone moments before the shooting.

The parents and their attorney, Benjamin Crump, met Thursday afternoon with U.S. Attorney for the Middle District of Florida Robert O’Neill, Deputy Assistant Attorney General for the Civil Rights Division Roy Austin Jr. and other representatives of the U.S. Department of Justice.

The agency’s civil rights division, the FBI, and the Florida Department of Law Enforcement are reviewing the case.

“First and foremost, we extended and continue to extend our deepest condolences to the family for their loss,” the DOJ said in a statement.

The national pressure over a perceived bungling of the investigation was ultimately too much for city officials, who are bracing for another mass rally at a commission meeting Monday. In an attempt to get in front of the planned events, the city parks department set up a mobile stage and seating for 700 people for Thursday night’s rally.

Hundreds of people streamed in, some wearing shirts emblazoned with Trayvon’s image, or Zimmerman’s mug shot from his 2005 arrest, and the phrase, “Arrest him.”

“Chief is gone, Zimmerman is next!” the crowd chanted.

Protester Michael Crevier, a musician from Orlando, said the chief needs to step down permanently.

More rallies are expected Friday in Miami-Dade, where students from at least three high schools staged walk-outs Thursday. More than 1,000 students walked out of Carol City Senior High School, where Trayvon attended his freshman and part of his sophomore year.

“I felt like we were bringing him justice, being his voice,” said Chauncey Davis, 17, who carried a poster that said, “Murder is Murder.”

As more than half the student body peacefully walked out of the north Miami-Dade high school, the principal took to a loudspeaker to express support but ask that the protest remain peaceful.