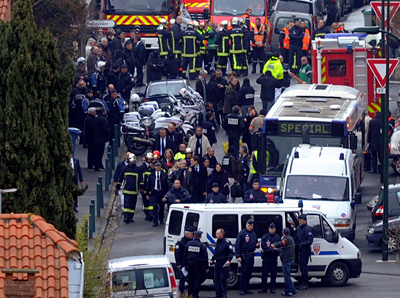 By Alexandra Mayer-Hohdahl and Clare Byrne –

TOULOUSE, France — The 23-year-old man suspected in a string of fatal shootings in France was found dead Thursday, after he jumped out of a window while firing at policemen who had stormed the apartment he had barricaded himself in for more than 32 hours.

Mohamed Merah came out of a bathroom with guns blazing as elite police officers were securing the apartment with help from video technology, said Interior Minister Claude Gueant.

(PHOTO: Police gather outside an apartment complex where Mohammed Merah, the main suspect in the killings of seven people, three of them children, in Toulouse and Montauban, has been locked in a stand-off with armed police for several hours at a flat in Toulouse, France, Wednesday, March 21, 2012.)

Observers had previously theorized that Merah might have killed himself, since negotiators had been unable to re-establish contact for hours. Grenade explosions had also failed to provoke any movement in the apartment before police went in.

“It’s at the moment where the video investigation started in the bathroom that Mohamed Merah came out with what appeared to be several weapons and shot very significant bursts of gunfire,” Gueant told reporters at the scene.

“The snipers … tried to overpower him. The policemen who had entered the apartment protected themselves and returned fire too,” he added. “Mohamed Mera jumped out … still shooting. When he hit the ground, he was dead.”

The gunshot volleys lasted for about six minutes, journalists on the scene estimated. Explosions were also heard.

An experienced elite police officer said he had never seen “a gunfire exchange of such violence and such intensity,” Gueant said.

Two police officers were injured, with one sustaining an injury to the foot and the other appearing to suffer from shock, he said.

President Nicolas Sarkozy, who was due to address the nation at 1 p.m. (1200 GMT), congratulated law enforcement officials in his first reaction to the event, adding that he had “a special thought for the people murdered and injured by the alleged killer.”

Merah has claimed responsibility for shooting to death three children, a teacher and three soldiers in three attacks in the Toulouse area since March 11. The police operation to arrest him began at 3:10 a.m. Wednesday.

Merah, who claims to have links to the al-Qaida terrorist network and said he had planned further attacks, initially told police negotiators he would surrender on Wednesday.

But as night fell, he continued to hold out, despite water, power and gas being cut to the apartment building.

His attitude had also significantly hardened during his last contact with negotiators shortly before midnight. Where Merah had previously told police that he had “no desire to be a martyr,” he later told them that “death did not scare him,” Gueant said.

The minister and Sarkozy had both said they wanted Merah to be captured alive, so that he could be tried for his actions.

Merah, a Toulouse native, was known to local courts through a string of convictions for delinquency. He had also landed on the radar of French intelligence services after he made two trips to Afghanistan and Pakistan in 2010 and 2011.

A jail director in southern Afghanistan had claimed that Mehra at one point was held in a prison in the southern province of Kandahar, but a southern Afghan governor denied that on Thursday.

Gueant said Merah claimed to have received al-Qaida orders to carry out an attack in France.

His first targets were the soldiers. On Monday, he then gunned down a teacher and three children at a Jewish school in an attack that horrified France.