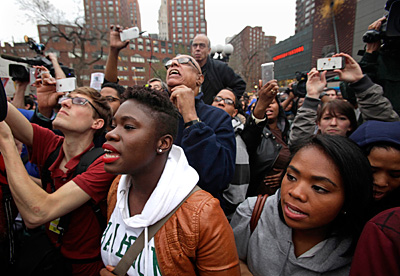 SANFORD, Fla. — In a tense meeting Wednesday that highlighted growing tensions over the shooting death of an unarmed black teenager, city commissioners here passed a vote of no confidence in the police chief, as protests spread north to New York City, where the slain youth’s parents joined a march demanding the killer’s arrest.

The no-confidence measure passed 3 to 2 after more than an hour of debate. Though it was not binding, the outcome and the public groans and applause that punctuated the debate underscored the anger pulsing through the Orlando suburb nearly a month after 17-year-old Trayvon Martin’s death on Feb. 26.

Most of that anger is focused on the fact that the admitted shooter, 28-year-old George Zimmerman, who has been described as both Latino and white, has not been arrested.

Dozens of Sanford residents gathered in the Sanford City Hall, where City Commissioner Mark McCarty set the tone for the meeting by noting that he had called for Police Chief Bill Lee’s ouster 10 days earlier in a meeting with the city manager, Norton N. Bonaparte Jr.

“I take no pleasure in publicly flogging our police chief. He’s a good man,” McCarty said.

But McCarty said questions surrounding the case, and the negative publicity cast upon the city since the killing, were largely the result of mishandling of the investigation. The questions, he said, include whether police were too quick to accept Zimmerman’s claim that he fired in self-defense, despite the fact that Martin was unarmed and that witnesses described hearing someone wailing for help before a gunshot rang out.

A lawyer representing Martin’s family, Benjamin Crump, has said that the teenager was on a cellphone with his girlfriend and expressed concern that he was being followed by a strange man in the seconds before he was shot. And two women who live near the shooting scene have said that Martin was lying face-down, with Zimmerman looming over him, after he was shot.

“If it was self-defense, why was he (Zimmerman) on Trayvon’s back?” one of the witnesses, Mary Cutcher, told CNN in an interview.

City Commissioners Patty Mahany and Randy Jones argued against the no-confidence vote, saying the city needed to wait for the outcomes of a grand jury inquiry scheduled for April 10 and a Department of Justice investigation. “A rush to judgment in any situation is wrong,” said Mahany, calling the no-confidence motion a “knee-jerk reaction.”

Only the city manager, Bonaparte, can fire Lee or ask for his resignation, and he gave no indication he planned to do so. But as speaker after speaker, black and white, took to the microphone to question why Zimmerman had not been arrested, it was clear that Bonaparte faced pressure that showed no sign of diminishing.

The Rev. Al Sharpton was due to lead a rally in Sanford on Thursday, and the city was planning for hundreds and possibly thousands of people at a special meeting Monday night to focus on the case.

In Manhattan’s Union Square, hundreds of people marched in memory of the slain teenager in a so-called Million Hoodie March on Wednesday, including Martin’s parents. Martin was wearing a hooded sweatshirt when he was killed while walking back from a store where he had purchased some candy and a drink.

“We’re not going to stop until we get justice,” said the teenager’s father, Tracy Martin, after thanking the crowd in New York, which chanted, “We want arrests,” according to The Associated Press.

“My son did not deserve to die,” the teen’s mother, Sybrina Fulton, told the crowd, AP reported. “My heart is in pain, but to see the support of all of you really makes a difference.”