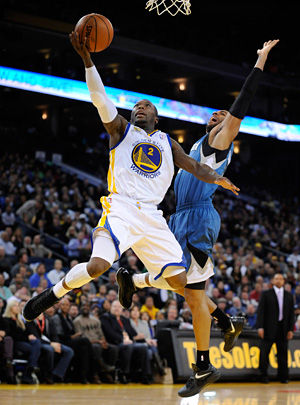 OAKLAND, Calif. — A week after they remodeled their franchise by trading away beloved Monta Ellis to Milwaukee for injured big man Andrew Bogut, the Golden State Warriors retired former star Chris Mullin’s No. 17 jersey number in a halftime ceremony Monday night that was both heartfelt tribute and stupid spectacle.

Before that elongated intermission, the Wolves had cruised to a 14-point halftime lead.

After it finally ended, they clung on tightly in the fourth quarter, ending a three-game losing streak and winning for the second time on this seven-game, 13-day road trip that concludes with games at San Antonio and Oklahoma City.

They did so with Kevin Love delivering another decisive 36-point, 17-rebound performance and with former Warrior Anthony Tolliver scoring all of his 10 points in the fourth quarter. The game changed midway through the final period, as the Wolves — missing both Nikola Pekovic and Michael Beasley for most of the game — produced a 13-3 run that turned a one-point deficit into a 97-88 lead with fewer than two minutes remaining.

Then the Warriors brought chairs and easels onto the court and honored the Hall of Famer, who played 13 of his 16 NBA seasons in a Golden State uniform, with a ceremony that dragged on even longer than intended when the hometown crowd turned on new team owner Joe Lacob with a continued chorus of boos, presumably for trading away Ellis.

First, Mullin and then Barry came forth to the center-court microphone in unsuccessful attempts to quiet a hostile audience, whom just moments earlier Mullin and others had called the greatest fans in the NBA.

Maybe they are the greatest, because by the time the game finally resumed, the Warriors had found their inspiration while the Wolves left their mojo back in the locker room.

The Warriors opened the second half with a 28-12 run, and suddenly the Wolves’ 14-point halftime lead was a 63-61 deficit with fewer than three minutes remaining in the quarter.

Golden State rookie Klay Thompson scored 12 points in that quarter after going scoreless on 0-for-6 shooting in the first half.

Thompson is the promising shooting guard for whom the Warriors cleared a starting spot and more playing time by trading away Ellis.

Golden State twice led by a point late in third quarter, but Love’s banked three-pointer late near the quarter’s end gave the Wolves a 71-67 lead after three quarters and then Tolliver helped extend that lead to 78-70 early in the fourth.

The Warriors, though, came right back with an 8-0 run to tie the score with eight minutes left.

Pekovic and Beasley both tried to play, even though Pekovic had his hurting ankles taped extra and Beasley limped around on a badly sprained toe before the game.

Beasley played just 10-plus first-half minutes while Pekovic started both the first and third quarters before being quickly replaced by rookie forward Derrick Williams.

The second time, Pekovic went limping to the locker room and ended up playing just 11 minutes.

“There’s no time for recovery,” Pekovic said about this condensed 66-game schedule. “Any other year, you sit out four days and you might miss one, two games. Now you sit, you miss three games. Just go out and play and help my team.”

Beasley couldn’t put his boot over his swollen toe after Sunday’s loss at Sacramento and limped around noticeably before Monday’s game.