Cyclones Fall To No. 1 Kentucky In NCAA Third Round 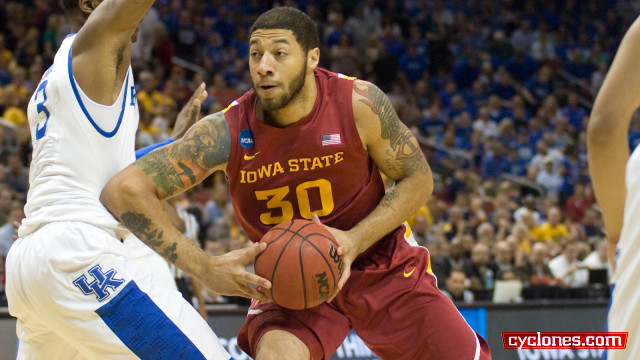 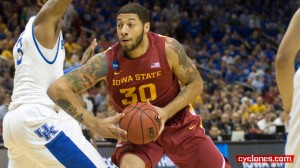 LOUISVILLE, Ky. – The Iowa State men’s basketball team began the second half on a 15-4 surge to tie No. 1 Kentucky at 42-42, but the Wildcats responded with a 22-4 run en route to an 87-71 win in the third round of the NCAA Championship Saturday at the KFC Yum! Center. Iowa State picked an inopportune time to go cold from 3-point range, making a season-low 3 buckets from beyond the arc. Conversely, Kentucky went 10-20 on 3-pointers.

The loss ends the Cyclones’ season, as Iowa State tied for the fourth-most wins in school history at 23.

Sophomore Royce White was electric, scoring 23 points on 9-12 shooting. White was one rebound away from notching his 12th double-double of the season. The Minneapolis, Minn., native battled all night with national-player-of-the-year candidate Anthony Davis and White delivered four dunks.

Kentucky’s Marquis Teague led all scorers with 24 points on 10-14 shooting. Davis posted a double-double with 15 points and 12 rebounds and notched five assists. The Wildcats had four players score in double figures.

Scott Christopherson chipped in with 15 points and fellow senior Chris Allen delivered 16. Allen concluded his 2012 NCAA Championship by averaging 18 points in two games. Allen went 8-8 from the free-throw line over the two-game tournament and was joined by Christopherson on 8-8 shooting from the charity stripe.

Freshman Percy Gibson made his NCAA Championship debut and tallied nine points on 3-4 shooting from the floor.

The Cyclones trailed the Wildcats 38-27 at the half despite a 10-point first-half performance from White, who was 4-5 from the field. Kentucky started the game hot and opened an early 23-11 advantage buoyed by three-straight treys. Iowa State responded with a 7-0 run of its own to cut the deficit to four.

Marquis Teague had a team-high 13 points for the Wildcats, while Davis had 10 points and eight rebounds in the opening stanza.

Christopherson ended the season shooting 90.3 percent from the free-throw line, the second-best clip in school history. He is one of only four players in Big 12 history to shoot above 90 percent at the charity stripe in a season.

The Lacrosse, Wis., native also ends his career as the school’s most accurate 3-point shooter, making 44.3 percent of his shots from beyond the arc in his three-year Cyclone career.