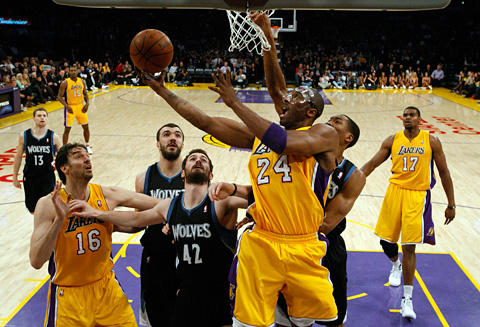 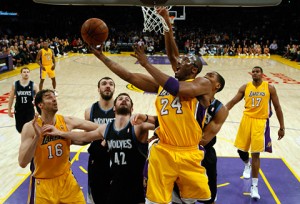 LOS ANGELES — So now we finally are reminded again what happens when Minnesota Timberwolves forward Kevin Love plays against the Lakers.

They lose, of course, as they did with a 97-92 defeat at Staples Center that was the Wolves’ 19th consecutive against the Lakers and kept Love 0-for against them during his four seasons in the league.

But it certainly wasn’t for lack of trying from the two-time All Star who returned Friday night after missing the last two games these two teams played.

One night after he clutched his left thumb in pain and needed postgame X-rays in Utah to show it was only sprained, Love played against the Lakers for the first time since late January at Target Center and delivered yet another 20/10 — 27 points, 15 rebounds — that still wasn’t nearly enough against a Los Angeles team that apparently isn’t reeling too much from the loss of veteran Derek Fisher.

“We’ve got to play with more urgency,” Wolves coach Rick Adelman said. “If you want to be in the playoff race, you’ve got to go out and play like you really want to stay in it. Sometimes if things don’t go their way or they don’t play as many minutes, guys just seem to start thinking about that. You can’t do that. If you want to stay in this, forget about the individual stuff and think about the team.”

While the Wolves stood still Thursday, quashing a three-way trade with the Lakers and Portland in the final minutes before an afternoon deadline, the Lakers made two moves.

They acquired former Timberwolf Ramon Sessions in a deal with Cleveland intended to address their point-guard problems.

Then they shipped Fisher away to Houston basically to save them luxury-tax payments when the Wolves refused to take his $3.4 million contract for next season so they could essentially swap Michael Beasley for Portland’s Jamal Crawford.

Before Friday’s game, Wolves coach Rick Adelman was asked if the Lakers’ two Thursday trades would have any effect on the game, particularly emotionally.

“Let’s see …” Adelman said, pretending to pause to think. “They’ve still got Gasol, Bynum and Kobe. No, I don’t think it’s going to make any difference to them.”

He forgot to include Matt Barnes, Metta World Peace and Sessions, for crying out loud.

Bryant on Friday still wore that clear plastic mask he wore to protect a broken nose when Love missed games at Staples Center last month because of the flu and one at Target Center last week because of back spasms.

And he showed once again that he remains the Lakers’ pulsing life force, efficiently scoring 28 points.

After he made consecutive three-pointers, including a challenging one falling away in the right corner, he stopped, adjusted that sweaty mask and posed for two supermodels sitting on the floor seats.

It was Bryant’s night work — and some help from the aforementioned Pau Gasol, Andrew Bynum and Barnes — that allowed the Lakers to build a 15-point second-quarter lead that the Wolves never really seriously challenged all night.

That lead stayed at double digits nearly for most of the rest of the evening, until the Wolves made their obligatory fourth-quarter run and got within 82-76 with 5:06 left and 89-82 with 1:42 left.

But each time, the Lakers answered, never allowing the Wolves to get any closer than six.

0 0 votes
Article Rating
Subscribe
Login
0 Comments
Inline Feedbacks
View all comments
PrevPreviousVikings’ Cook has his life back after acquittal
NextBowling scores, 3-11 through 3-16, 2012Next