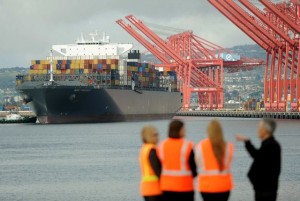 LOS ANGELES — The largest cargo container ship to ever dock in the Americas made a fog-shrouded first voyage into the Port of Long Beach on Friday, sending a message to competitors that Southern California can handle the giant vessels most others can’t welcome for at least two more years.

(PHOTO: The MSC cargo ship Fabiola is manuevered to its dock at the Port of Los Angeles in Los Angeles, California, Friday, March 16, 2012.)

Out by the breakwater, it looked as though a man-made island had sprung up overnight, but the dark shape was a vessel called the Fabiola, gliding very slowly toward port.

The Fabiola is one of a new generation of vessels that can carry 11,000 or more containers, favored by ocean cargo lines because packing more freight boxes onto each ship lowers costs.

“She’s way beyond our previous record for size,” said Dick McKenna, executive director of the Marine Exchange of Southern California, which logs the arrival and departure of all ships calling at the ports of Los Angeles and Long Beach, the nation’s largest seaport complex. “This is quite a significant jump for us.”

The Fabiola, owned by Geneva-based Mediterranean Shipping Co., can carry 12,500 containers. The ship is just 30 feet shorter than the Empire State Building is tall, as wide as a 10-lane freeway and big enough to carry the contents of eight 1-million-square-foot warehouses.

But most harbors in North, Central and South America aren’t deep enough and don’t have the equipment to handle the biggest ships, though several are on a building spree to take market share and jobs from Southern California’s ports.

In Panama, new canal locks that can handle such huge vessels won’t be finished for at least two years. The Panama Canal is a vital link on a so-called all-water trade route that competes with Southern California for the movement of products from Asia, mainly from China.

The Gulf Coast and East Coast ports that could benefit from the widened canal will have to spend billions of dollars to be ready.

That gives the country’s two largest cargo container ports — Los Angeles and Long Beach — an important head start in showing off their ability to handle ships like the Fabiola, which sailed from Yantian, China.

“When customers see that we welcome these ships now, it will affect their deployment decisions when they plan out how to ship their cargo,” said Shawn Strawbridge, managing director for trade development and operations at the Port of Long Beach. “This ship’s arrival here today is a very good example.”

Wally Baker, president of the Jobs 1st Alliance, a jobs promotion group pushing to help the twin ports maintain their competitive dominance, said local residents “need these ships calling at our ports. It will lead to more jobs and more business.”

The Fabiola’s smooth arrival looked routine, but a lot of preparation had gone into bringing her into the port for the first time, said Tom Jacobsen, president of Jacobsen Pilot Service Inc., the 90-year-old family-run business that handles all of the Long Beach port’s ship arrivals.

Pilots are the maritime experts found at any major port who take over the handling of ships as they approach ports and guide them safely to dock.

For the Fabiola’s arrival, Jacobsen pilots went to the California Maritime Academy in Vallejo, Calif., northeast of San Francisco, to practice on its ship simulator the maneuver that would bring the vessel to dock with the assistance of three tugboats, swing her around in the port’s turning channel and ease her past shoals on either side.

The normal route for a Mediterranean Shipping Co. vessel couldn’t be used because the ship is too wide for the Long Beach port’s back channel, Jacobsen said, and too tall to fit under the aging Gerald Desmond Bridge, which is due to be replaced.

“This is just the beginning,” Jacobsen said of the Fabiola’s arrival. “We’re going to see several ships after this one that are just as big or almost as big.”

Mediterranean Shipping, for instance, has become the most prolific buyer of so-called very large container ships.

The company, which commands a merchant fleet bigger than the U.S. Navy, with 484 ships it either charters or owns, now owns 43 such mega-ships, or more than twice as many as any other shipping line.

Before Friday’s docking, the Fabiola, which was completed in 2010 by Samsung Heavy Industries of South Korea, was used on one of Mediterranean Shipping’s Asia-to-Europe routes.