What comes around … must come down 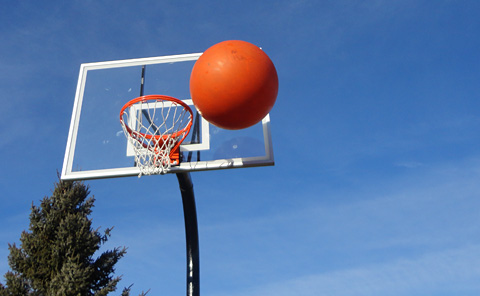 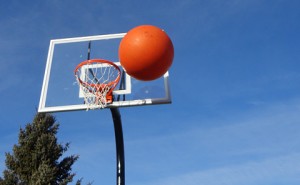 It was in the middle of the street about half a block from home as we returned from a weekend basketball tournament out of town.

Bouncing with enthusiasm, a boy jumped out of the car to remove this giant powerball of fun from our path. Obviously amused, he picked it up – seeming to think of putting it in the back seat with him – then threw it over the car. It came to rest by the curb, out of the way of traffic. We drove home and unpacked.

But this ginormous sphere still had a pull on the boy. Soon he asked if he could go get it. It probably blew out of a neighbor’s yard, the lad was advised. It was a very windy day.

We had seen the same ball a couple weeks previously, sitting on a corner near a utility pole, as if waiting for a bus or posing as a piece of slightly off-color artwork for a Target store. Big enough to be lifelike and seemingly able to roll at will, this thing wouldn’t need a bus to get around – just some good kid energy.

“Sure, go get it. We’ll check around the neighborhood later for the owner.” 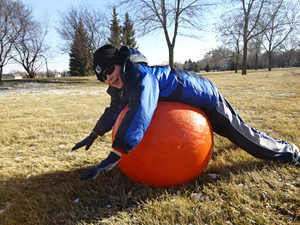 Such joy. It just screamed “FUN,” like the bottom dot of an enormous exclamation point.

But there was a slight technical problem, the boy pointed out upon returning home with the orange orb. It was a little low on air. So we pumped it up to maximum play pressure and began kicking and bouncing and tossing it back and forth in the driveway, laughing at the enormity and brightness and bounciness of this overgrown toy.

Then the big boy had an idea: Let’s take it to the park by the outdoor basketball court and play with it in the wind.  We took turns kicking it through yards and across a street, through the dusting of snow and into the park, laughing and having a …

The youngster repeatedly ran up and pounced on his new play friend, bouncing or rolling off as we howled in delight.

So big and personable, the ball deserved a name. How about ING? It looked like the emblem of the online bank. The 11-year-old liked the name Marv. So it was called MarvING – at least for a while, until it was changed to Mars, like the red planet which it somewhat resembled.

More kicking and tossing, laughing and rolling around. The three amigos were having fun in the wind. It blew the ball fast on the paved basketball court. And if you think it’s hard to shoot a regular basketball in the wind, try one that’s about three times bigger. We tried to land it on top of the hoop, but soon tired  from hoisting the big honking ball up there.

We brought it home and parked it in the garage, then went in to warm up and ponder this fantastic orb’s origin. The chance that he might get to keep it kept the kid in high spirits. It seemed an extension of the good karma from the Sunday before, when we stopped to help a young woman look for a lost earring in the parking lot between Best Buy and Kohl’s. Within seconds we’d found it, were thanked and were on our way. And almost instantly – well, 10 minutes later at the most – we were able to inexpensively buy a used X-Box cordless remote that had just been brought in to Gamers.

If not karma, maybe the ball was part of a celestial message from three evenings prior, when in the eastern sky was observed a nearly full moon underlined by two brightly lit and perfectly parallel jet condensation trails. Another parallel con trail appeared above the moon, making it look like a musical note. Then what should play on the radio? The Alan Parsons Project’s “Eye in the Sky.”

Someone’s looking over us.

And now this big bright orange globe lights up our life.

But somewhere, someone’s probably missing it — quite possibly a family with three kids who play this ball with great energy and spirit. So a neighbor got a Facebook message with a picture the next day.

“We’ll bounce it over after school tomorrow,” said my follow-up message, “but you might have to borrow it back someday for a while.”

It was a world of fun while it lasted.