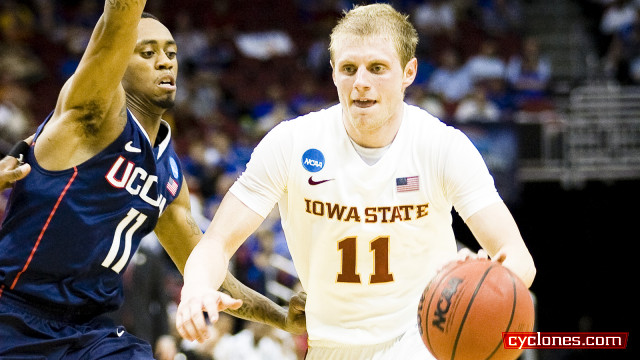 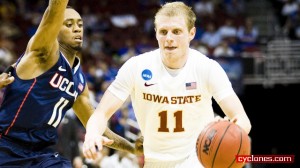 LOUISVILLE, Ky. – The No. 8-seeded Iowa State men’s basketball team defeated defending national champion and ninth-seeded Connecticut 77-64 Thursday night in the second round of the NCAA Tournament in the KFC Yum! Center.  The Cyclones raced out to a lead the stretched to as much as 22 points and showed grit down the stretch to defeat the Huskies.

The win marked the first time Iowa State defeated the defending national champion since a 97-89 victory over Kansas on Feb. 22, 1989 in Hilton Coliseum.

Senior Chris Allen illustrated how valuable his NCAA-Tournament-high 14 games of experience was as the Cyclone guard posted a team-high 20 points. Sophomore Royce White was a beast in the post, notching his 11th double-double of the season with 15 points and game-high 13 rebounds. Senior Scott Christopherson was the catalyst of the Cyclones’ first-half run, and the Iowa State sharpshooter finished with 15 points on 3-3 shooting from beyond the arc.

While Iowa State (23-10 overall, 12-6 Big 12 Conference) was hot from long range in the first half (6-12) the Cyclones went cold in the second stanza.  The Cyclones went 0-4 from beyond the arc after the break but showed they can deliver down low when it mattered.

After only trailing once in the contest (5-4, 1:53 into the game), Iowa State’s lead was slowly chipped away throughout the second half. UConn  (20-14) clawed to within six (58-52) with 8:26 remaining. Sophomore Bubu Palo made a key play down the stretch as he hit a rainbow in the lane to give the Cyclones a 61-52 lead with 5:45 left.  The Cyclones would never lead by less than nine points the rest of the way.

At the break Iowa State led 42-32 and was bolstered by Christopherson’s 11 points on 3-3 shooting from long range. White was strong in the first half as the sophomore had eight points and eight rebounds while shooting 4-5 from the field.  The Cyclones shot 50 percent (6-12) from 3-point range in the first half and 51.5 percent (17-33) from the field.

Anthony Booker came off the bench and gave the Cyclones some added strength in the post during the first half.  Booker had six points and five rebounds at intermission.

The Cyclones face top-seeded Kentucky Saturday at approximately 6:45 p.m. CDT in the KFY Yum! Arena in the third round of the NCAA Championship.