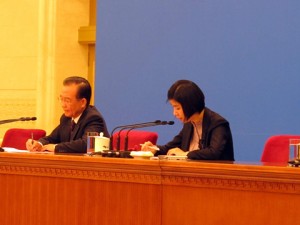 BEIJING — In a rare public mention of the tumultuous Cultural Revolution, Chinese Premier Wen Jiabao warned on Wednesday that unless his nation pushes for political reform it risks losing both economic gains and social stability.

“Without a successful political reform … such historical tragedies as the Cultural Revolution may happen again,” said Wen, referring to a decade of social upheaval sparked by Mao Zedong in 1966.

That event turned China’s society in on itself as Mao urged a nationwide movement to, among other things, seek out counter-revolutionary elements. Millions of people were displaced, beaten or killed.

For many leaders of Wen’s generation, it’s a piece of history that reminds them of the chaos they’re obsessed with avoiding. The summoning of the words “Cultural Revolution” lent a particularly stark tone to Wen’s remarks as he said the need for change has reached “a critical stage.”

As has long been his habit, however, Wen did not say what exactly should be done to reshape the political status quo. Wen’s vagueness about what he means by “reform” has led some critics to question whether his role has more to do with offering the public a softer face of the Chinese Communist Party than it does affecting actual change.

In what probably will be his last annual news conference as premier — replacements for much of Beijing’s leadership are scheduled to be announced later this year — Wen signaled that for all the hype surrounding the world’s second-largest economy, there are still many domestic challenges.

He cited official corruption and income disparity, problems that observers say have created a growing wedge between the regime and its subjects. Wen also outlined government response to hot-button issues such as high real estate prices, which leadership has struggled to manage, and the ongoing expropriation of rural land, a common cause of unrest in the countryside.

“I often feel that much work remains to be finished, many things have yet to be properly addressed and there are many regrets,” Wen said, addressing a crowd of hundreds of journalists in the Great Hall of the People, a large piece of Soviet-style architecture that anchors the west side of Tiananmen Square.

Nonetheless, Wen said he was ready to “face history.” He presided over a three-hour news conference that book-ended the rubber-stamp National People’s Congress, which drew to a close the same day.

In doing so, the 69-year-old premier fielded a wide range of questions that dipped into controversial subject matter such as democracy (Wen: not yet) and protest by self-immolation in ethnic Tibetan areas (Wen: the Tibetan government in exile is trying to split China apart).

As usual with Chinese leadership, though, it was difficult to discern the broader implications of his words.

When speaking about political reform, for example, Chinese officials usually are referring to the process of making one-party Communist rule more efficient and not contemplating wholesale democratic changes.

Asked about the prospect of direct elections in China, Wen on Wednesday gave a familiar answer — that after the people become accomplished at voting for village committees, the process will move upward to the township and county levels. There have been village elections in parts of China since the 1980s.

The country’s “socialist democracy,” Wen said, will be developed “in a step-by-step manner.”