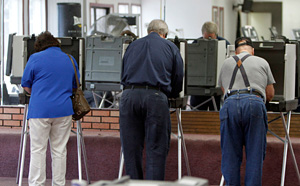 BILOXI, Miss. — Rick Santorum won the Alabama and Mississippi primaries Tuesday, striking deep into the South to deliver a stunning blow to Newt Gingrich in the battle to become the conservative alternative to front-runner Mitt Romney.

Poised to shake up the ever-unsettled race, Santorum’s twin wins effectively killed Gingrich’s Southern strategy and likely could create pressure on the former House speaker to drop out of the race. One conservative activist urged that Tuesday evening.

Romney trailed Santorum in both states, likely to add delegates to his pack-leading total but now facing a potentially changing landscape. Unable to stop Santorum’s relentless challenge, Romney earlier Tuesday chided the former Pennsylvania senator, saying prematurely that Santorum was “at the desperate end of his campaign.”

Ron Paul was a distant fourth and not a factor in the day’s voting.

“We did it again,” Santorum told cheering supporters in Lafayette, La., already campaigning for a coming contest.

“This is a grass-roots campaign for president,” he added, exultant in his ability to win despite being routinely outspent by Romney. “Who would have ever thought in the age of the media we have in this country that ordinary folks from across this country can defy the odds day in and day out.”

“It’s quite an evening,” Gingrich told supporters in Birmingham, Ala. “Obviously, we’d like to have come in first.”

He congratulated Santorum and ripped the media and Romney.

“The elite media’s effort to convince the nation that Mitt Romney is inevitable just collapsed,” he said. “If you’re the front-runner and you keep coming in third, you’re not much of a front-runner.”

He vowed to press on to the Republican National Convention in Florida in August.

Romney, en route from Missouri to New York for a series of fundraisers on Wednesday, did not plan to appear in public Tuesday evening.

“I don’t think anybody expected Mitt to win Alabama or Mississippi,” Romney adviser Eric Fehrnstrom said. He said Romney remains far ahead in delegates, and that it’s improbable that Santorum can overtake Romney.

There were 107 delegates at stake Tuesday: 47 in Alabama, 37 in Mississippi, 17 in Hawaii caucuses and six in American Samoa.

As voting was under way, Romney led the field with 454 of the 1,154 delegates needed to clinch the nomination, according to The Associated Press tally. Santorum had 217, Gingrich had 107 and Ron Paul 47.

The stakes Tuesday were particularly high for Gingrich, who bet heavily on Southern wins to keep his struggling campaign alive.

The Southern states, reliably Republican in general elections, are among the most conservative in the country. Evangelicals and born-again Christians dominated the voting, making up about 74 percent of the vote in Alabama and about 80 percent in Mississippi, according to exit polls.

Their refusal to rally to Gingrich spelled trouble.

“Newt has given it a great run but Rick Santorum has earned a mano a mano shot at Mitt Romney,” Appell said. “Santorum has demonstrated clear strength in the Midwest, West and South, and he has earned the opportunity to take on Romney in a two-man race.

“It is also abundantly clear from South Carolina to Georgia to Tennessee to Alabama and Mississippi that Southern conservatives are thoroughly rejecting Mitt Romney,” he said. “In fact, it’s clear that conservatives across the country are sending a clear message to the Republican establishment: ‘nothing is over until we decide it is.’ ”

Gingrich’s campaign a week ago said that he had to win Alabama and Mississippi — as well as Louisiana and Texas — to remain credible. The candidate himself backpedaled, however, saying he’d fight on regardless of the Tuesday finish.

Bidding for their votes, candidates poured on Southern references, sometimes at the risk of gaffes.

“I realize it’s a bit of an away game,” Romney, the former Massachusetts governor, said at one point. “I am learning to say y’all and I like grits, and … strange things are happening to me.”

At another, he referred to his morning grits as “cheesy grits.” He also brought in blue-collar comedian Jeff Foxworthy to vouch for him.

Not to be outdone, Gingrich campaigned in a Bassmaster fishing shirt and chided the Yankee Romney.

“I just want you to understand that as someone who has represented Georgia for a long time, I like grits, I like cheese grits, I like it with gravy, and there are a number of ways you can have it,” Gingrich said. “I’m glad that the governor is beginning to learn about the South.”

Turnout was steady at a precinct in Biloxi, Miss., where Maureen Broussard said she was turned off by Romney’s use of Foxworthy to reach the South. “It was like he was saying, ‘Let me send another redneck to talk to those redneck people,’ ” she said.

Gingrich, the former speaker of the House of Representatives, watched the returns from Birmingham after spending the day in a last-minute pitch for votes in Alabama, which borders Georgia. The only states he’s won outright are Georgia and South Carolina, which also borders Georgia.

Gingrich aides Tuesday predicted a long slog to the nomination, one that would keep Romney from winning the majority of delegates during the primaries and allow Gingrich a summertime chance to win over uncommitted delegates before the national convention in Tampa, Fla.

“With 4 candidates remaining, the GOP nomination now moves into unchartered waters with history in the making … this nomination will not be decided until the fourth quarter — and that is not until June,” the memo said.