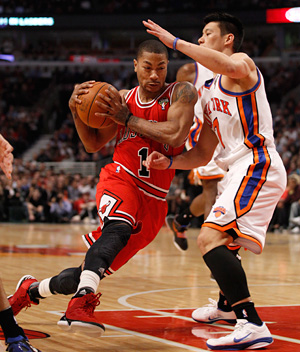 Monday night at the United Center, matched against international sensation Jeremy Lin, the mask came off.

(PHOTO: Chicago Bulls point guard Derrick Rose (1) drives around New York Knicks point guard Jeremy Lin (17) during the first half of their game at the United Center in Chicago, Illinois, on Monday, March 12, 2012.)

Rose defended with aggression. He blasted downcourt, often in out-of-control fashion. He yelled at officials. He cursed aloud after missing two free throws.

And when the passion finally played out, Rose stuffed the box score with 32 points, seven assists and six rebounds as the Bulls downed the Knicks 104-99.

That Rose missed 17 of 29 shots and committed four turnovers offered a glimpse of his aggressive mindset. So did his atypical postgame comments, which focused on him not getting to the free-throw line until the second quarter and attempting nine free throws in close to 43 minutes.

“I gotta be the only superstar in the league that’s going through what I’m going through right now,” Rose said. “But I can’t say too much about it.”

Lin finished with 15 points and eight assists in 32 foul-plagued minutes, drawing chants of “Overated!” as the Knicks dropped their sixth straight. Lin actually acquitted himself well, blocking a first-half Rose attempt from behind and stripping him cleanly in the third quarter.

But Rose kept coming and coming, emphatically throwing down a vicious dunk with just over 6 minutes remaining.

“I don’t usually dunk it, but I was just mad I wasn’t getting any calls,” Rose said.

Asked if he feared a fine for criticizing officials, Rose shrugged.

“I could care less right now,” he said.

Rose also acknowledged he was amped to face Lin.

“Definitely. Who’s not right now?” Rose said. “No matter who I’m playing against, I’m trying to win the matchup.”

Playing without Luol Deng, C.J. Watson and Richard Hamilton, the Bulls had their typical contributions from myriad sources.

Taj Gibson seemingly recovered every loose ball and finished with 15 points and 13 rebounds. One of Gibson’s eight offensive rebounds led to Rose’s poster dunk — off a bounce pass from Joakim Noah — and Gibson drew a standing ovation for his effort.

“My job is to make small plays turn into big plays,” he said.

Noah, returning from a one-game absence due to illness, matched Gibson’s double-double with 12 points and 10 rebounds. The Bulls enjoyed a rebounding advantage of 56-38 and a 24-6 edge in second-chance points.

The Knicks’ last gasp ended when Anthony, who scored a team-high 21 points, missed twice on a three-shot possession, including a 3-pointer, with the Knicks down five and under 30 seconds.

And now comes the Heat on Wednesday.

“It’s big because that’s our next game,” Rose said. “That’s the way we look at it. We know they’re going to be charged. They beat us last time. They’re playing good — good players, good coaching staff. It’s going to be a battle.”