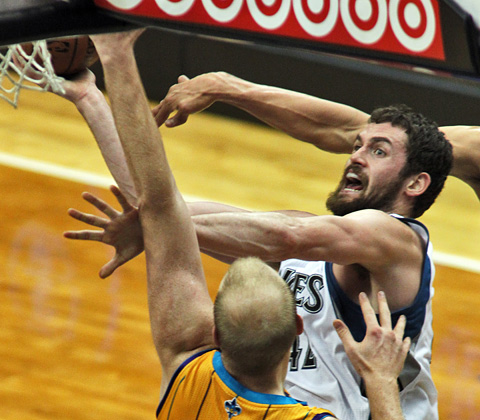 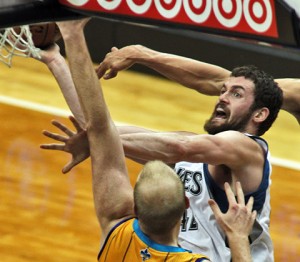 MINNEAPOLIS — It was quiet inside Target Center before the Timberwolves’ game with New Orleans on Saturday night. It was as if fans were wondering, what now? Or: what next?

(PHOTO: The Minnesota Timberwolves’ Kevin Love scraps for a rebound against the New Orleans Hornets at the Target Center in Minneapolis, Minnesota, on Saturday, March 10, 2012. New Orleans knocked off Minnesota, 95-89.)

It was quiet in the team’s pre-game shootaround, too. “You could feel everybody was a little bit disappointed,” Anthony Tolliver said. “He’s gone for the season.”

The Wolves played the first game of the rest of their season without Ricky Rubio, who tore the ACL in his left knee in the closing seconds of Friday’s loss to the Lakers.

If everyone was a bit apprehensive — either in the stands or on the bench — it was understandable. So, before the game, Kevin Love got up and circled the floor, clapping his hands, trying to get the crowd on its feet.

With rare exceptions they never really did.

In a 95-89 loss to the Hornets the Wolves turned the ball over too much and didn’t play enough defense. As coach Rick Adelman said, “It’s like the start of the season all over again.”

But here’s the question: Is this the Wolves team that fans can expect, sans Rubio, for the rest of the season? Or can this be explained away as an emotional hangover?

“We definitely missed him tonight,” said Love, who scored a game-high 31 points with 16 rebounds. He, Nikola Pekovic (21 points, 11 rebounds) and Luke Ridnour (14 points, 10 assists) had double-doubles.

But that didn’t make up for defense that allowed the Hornets, owners of the worst record in the Western Conference, to break a four-game losing streak.

Love talked about the “emotional shock” of losing Rubio. “He makes winning plays, he’s a winner,” Love said. Still, before the game the message, from Adelman on down, was that players have to step up, and that the playoffs are still a goal.

And then this: The Hornets picked up 28 assists on 39 shots, getting just about any look they wanted. The Wolves? Playing with only one true point guard — J.J. Barea is still injured —   the team turned over the ball 17 times, leading to 25 Hornets points.

Chris Kaman led four scores in double figures with 20 points for New Orleans, which used an 11-0 run in the first half to take control.

Down seven in the fourth, the Wolves rallied to tie the game at 74 on Love’s two free throws with 9:03 left. But, with the Wolves missing eight consecutive shots, the Hornets scored the game’s next 11 points.

“It was the worst game in a long time,” said Adelman, who refused to use Rubio’s injury as an excuse. “We are who we are. At the defensive end that shouldn’t be a factor. That’s effort, communication. It wasn’t there.”

Love agreed. “Everyone, myself included, needs to step up. We can’t shoot that poorly, play that badly on defense, we can’t bring no energy. We miss Ricky, but mostly that was a bad effort.”

Still, without Rubio the Wolves will have to find other ways to operate efficiently on offense, even when Barea returns from his sprained ankle, which could be a soon as Monday in Phoenix.

“We were all used to him being the starting point guard,” said Martell Webster, who moved into the starting lineup Saturday. “He’s injured, out for the season. It’s devastating. But we have to bounce back.”

Said Love: “There was no energy. I don’t know if it was the emotions of last night. We just didn’t bring it tonight.”

— Love said his sore back came from having fallen on his hip a few times and from a hit he took from Nicolas Batum last week against Portland. Love said he will require regular treatment going forward.