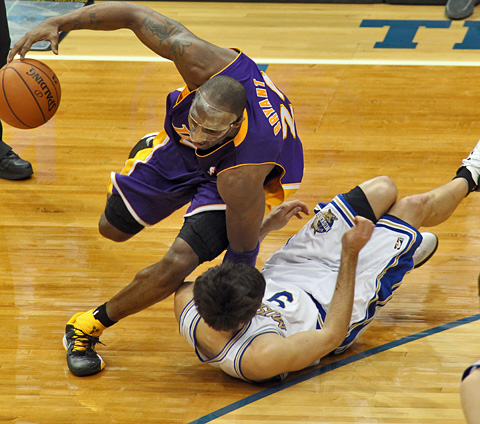 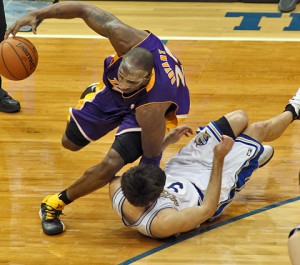 MINNEAPOLIS—These are the Los Angeles Lakers nowadays, needing every possible drip of luck and skill to beat a team on the road, even if the opponent is the Minnesota Timberwolves without Kevin Love.

(PHOTO: The Minnesota Timberwolves’ Ricky Rubio, right, goes down with a leg injury while guarding the Los Angeles Lakers’ Kobe Bryant late in the game at the Target Center in Minneapolis, Minnesota, Friday, March 9, 2012. The Lakers defeated the Timberwolves, 105-102.)

The Lakers are trying just about everything to win, which they did Friday, 105-102, at Target Center, as Kobe Bryant scored 34 points a day after a team video session turned into a say-what-you-want meeting between coaches and players, the Los Angeles Times has learned.

Coach Mike Brown apologized to Bryant for publicly questioning his shot selection after the Lakers’ stunning 106-101 loss Wednesday in Washington. Brown also apologized to Matt Barnes and Metta World Peace for insinuating the same thing about their shot selection in that game.

Brown then invited players to speak their minds — either to him specifically or to their teammates.

Derek Fisher mentioned the need to finally get serious, the importance of making the commitment to chase a championship. Pau Gasol said similar words. Bryant spoke disdainfully of the need for long meetings, wanting instead for the team to do its talking on the court.

The Lakers began their video session within an hour of landing in Minneapolis on Thursday afternoon.

As World Peace told The Times: “We lost two games in a row and it didn’t sit well with our leaders. Coach Brown is the captain of the ship. Kobe is driving the ship. There were some concerns, so we addressed it.”

When asked about the meeting by The Times, Brown said it developed out of nowhere during a video session.

“I was doing all the talking so I just asked my assistants to say something and I asked the players to say something. It wasn’t planned going in, but it just happened because I was running my mouth,” he said. “I thought it was productive because some guys got to say however they felt and it gave other guys the opportunity to speak up if they wanted to.”

Brown also told players he believed the Lakers’ offense was improving in recent weeks despite a weak 85-point output in an overtime loss Tuesday in Detroit.

The Lakers were averaging 94 points a game before Friday, 21st in the league and well behind their average of 101.5 last season.

Brown told reporters Friday that the Lakers would not score as often this season because they’re a low-possession team.

“We don’t play a fast pace. We don’t have Tony Parker and those types of guys running the wing and pushing the ball,” he said. “We’re a post-up team. so our pace is a little bit slower, a little more methodical and so our points per game is not going to be as high.”

Brown countered that the team was relatively efficient because of its field-goal percentage. The Lakers were shooting 45.1 percent before Friday, ninth in the NBA.

Brown also pointed out that scoring was down across the NBA in the lockout-shortened season. Eleven teams averaged more than 100 points last season but only three this season: Denver, Miami and Oklahoma City.

As for Friday’s game, the Lakers caught a break when Love, the Timberwolves’ All-Star forward, sat out because of back spasms, taking away his averages of 25.5 points and 13.8 rebounds.

Timberwolves guard Ricky Rubio couldn’t play the last few possessions after sustaining a left-knee injury in a collision with Bryant with 16.4 seconds to play.

A blocking foul was called on Rubio, who was carried to the bench by teammates, and Bryant made two free-throw attempts to give the Lakers a 103-102 edge.

Pau Gasol blocked a shot by Derrick Williams at the other end, Bryant made two more free-throw attempts, and the Lakers escaped with their 18th consecutive victory against Minnesota after Luke Ridnour missed a three-pointer at the buzzer.

“It was two embarrassing losses but it could have been worse,” Bryant said. “We could have lost to Cleveland at home like OKC did tonight.”