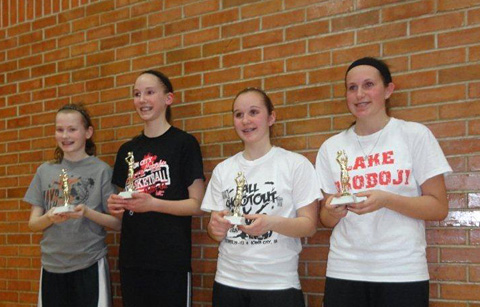 MASON CITY – Hustling off to the YMCA to shoot hoops after work – sometimes in heels – paid off for Sandy King.

She was able to help her daughter Jenny win the Mother/Daughter Shootout Tuesday evening at Mohawk Gym. They edged out Sydney Rottinghaus and her mom, Shari, in the championship round of the annual free throw shooting contest for middle school students.

In the Father/Son Shootout on the other side of the gym, Kyle Lang and his dad, Matt, narrowly beat Mac Skogen and his dad, Jeff.

A Father/Daughter competition and a Mother/Son competition will take place Thursday evening at the gym.

“It was not good – very stressful,” Sandy King said with a smile, happy the competition was over and happy to have helped her daughter win.

Their secret to success?

“She had me at the Y shooting baskets in my heels,” Sandy King said, laughing while explaining that she made about four trips to the YMCA recently, usually straight from work.

Like many of the competitors, the Kings were no strangers to the annual free-throw shooting competition. They have participated the past three years, but never with such success.

Mac Skogen helped get to the shootout championship by nailing 10 of 10 from the line in the semifinals against Alex Sanchez and his dad. Sanchez hit nine of 10 in the third-place match to beat Buttweiler and his dad. Lang also hit nine in at least one round.

Winners of the shootouts receive trophies. Those finishing second through fourth receive plaques with their names on them. In the girls’ competition, Katie Voortmann and Sydney Oliver finished third and fourth, respectively. 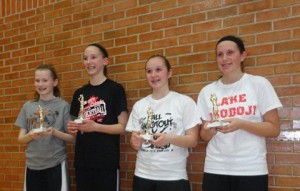 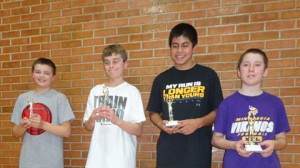