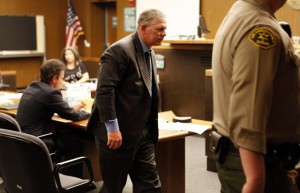 LOS ANGELES — Former New York Mets star and financial guru Lenny Dykstra was sentenced Monday to three years in California state prison after a judge rejected a last-ditch effort to change his no contest plea and fight the charges.

(PHOTO:Lenny Dykstra is placed into custody and led out of the San Fernando, California courtroom on Monday, March 5, 2012, where he was sentenced to serve three years. The former New York Mets and Philadelphia Phillies baseball outfielder was sentenced on charges of grand theft auto and filing a false financial statement.)

He had pleaded no contest to grand theft auto and filing a false financial statement in connection with a scheme to use somebody else’s paperwork to steal or lease several new cars, according to court records.

He was immediately taken into custody after the sentencing. Dykstra, who faced up to a four-year sentence, must serve his time in state prison.

“Mr. Dykstra might not believe he is a criminal, but his actions have been criminal,” she said, invoking baseball terminology such as “strikes” and “home run” to underscore her point.

Monday’s sentencing marked the latest strike for Dykstra, who has been mired in legal, financial and criminal woes over the last several years — a huge turnaround for the ex-baseball player who later became a self-styled financial expert.

In a rambling and repetitive speech in which he requested leniency, Dykstra apologized to his family and told the judge he had voluntarily entered drug rehab.

He did not, however, apologize to the victims, including the man whose identity he stole in an effort to steal the cars. This did not go unnoticed by prosecutors, who said he had no remorse for his actions.

Dykstra’s lawyer, Andrew Flier, unsuccessfully urged the court to withdraw the no contest plea, arguing that Dykstra was not involved in fraudulent activity and was “relying on paperwork and certain representations” from others. But Ulfig said Dykstra was given ample due process and he had numerous opportunities to show evidence that he was innocent.

Dykstra and Hymers allegedly provided information from a man who they said was a co-signer at two dealerships, even though they were not authorized to use his name, prosecutors said.