Bryant, Lakers are head and shoulders above Heat in 93-83 win 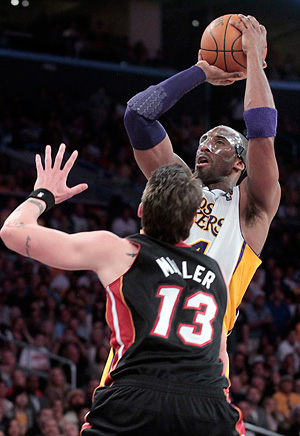 LOS ANGELES — These have been silent nights with no lights in Kobe Bryant’s dwelling, the darkness surrounding him as he pushes through a whiplash injury and recovers from a concussion and broken nose.

But he’s plenty lively on the court, managing to avoid the glare of hyperbole before Sunday’s game against the Miami Heat. His revenge came not in a retaliatory foul against Dwyane Wade but in his own stat line and on the scoreboard.

The Los Angeles Lakers beat Miami, 93-83, Bryant blowing through the 30-point barrier for a third consecutive game since Wade’s hard foul in the All-Star game caused his nasal fracture and concussion.

It wasn’t a finesse-filled afternoon, and it included Pau Gasol and LeBron James tossing a few words at each other, but Bryant scored 33 points, Metta World Peace had 17 and the Lakers held the league’s second-highest scoring team to 37.5 percent shooting.

Bryant claimed for several days he wasn’t irritated by Wade’s foul. He revealed Sunday that he was still physically affected by it and was “letting the brain rest as much as possible.”

“In terms of injuries, this has been one where I’ve really had to kind of adjust my lifestyle,” Bryant said.

He and the Lakers (23-14) are parallel lines trending upward. Bryant is averaging 34 points and 54.3 percent accuracy in the last three games, during which he has worn a facial mask to protect his nose. And the Lakers remain tied with the Los Angeles Clippers for first place in the Pacific Division.

“He’s probably (irritated) about his nose and he wants to go hard,” said Andrew Bynum, who had 16 points and 13 rebounds.

The Lakers played tough in the final seconds of the third quarter, denying the Heat a couple of times down low before Gasol got in the face of James after contact between James and Troy Murphy. The crowd loved it, the Lakers receiving their loudest ovation since … since … quite a while.

“I saw that (James) elbowed a little bit, or shoved Troy,” said Gasol, who had 11 points and 10 rebounds. “At one point you have to say, ‘It’s enough.’ If the officials don’t make a big deal out of it or make a certain call, then you have to force the issue a little bit and make them understand that this is going on and we’re not going to take this kind of thing here.”

Miami power forward Chris Bosh missed the game because he was not back from his grandmother’s funeral. He is averaging 18.4 points and 8.3 rebounds.

James made only 12 of 26 shots and had to work increasingly hard for 25 points. He was guarded primarily by World Peace.

“I thought he was sensational,” Bryant said of his teammate.

Bryant did pretty well defensively too. Wade had 16 points on seven-for-17 shooting and as many turnovers (five) as assists.

He fouled out while chasing Bynum on an alley-oop attempt with 5:14 to play. Everybody was standing and cheering at Staples Center. Almost everybody.

“Mike Brown has made them a better defensive team,” Wade said of the Lakers’ coach. “I didn’t get into my rhythm like I wanted to. They had a lot of intensity on pick-and-rolls, which is different for them. You could see the Mike Brown factor.”

Wade said he got hit in the head in the third quarter and had a headache. He wasn’t sure which player got him.

Bryant reiterated there were no hard feelings between the perennial All-Stars.

“We already talked about it,” he said. “We put it behind us. He knew I was going to be ready regardless.”