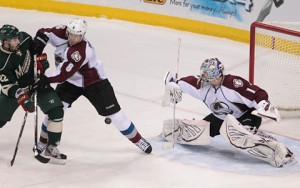 ST. PAUL, Minn. — Two hours before starting Sunday’s game against Colorado, a hooded Matt Hackett sat alone on the Wild bench and stared at the ice.

(PHOTO: Cal Clutterbuck of the Wild tried to get to a rebound off the pads of Avalanche goalie Semyon Varlamov while defended by Colorado’s Jan Hejda in the third period on Sunday, March 4, 2012, at Xcel Energy Center in St. Paul, Minnesota. The Colorado Avalanche defeated the Minnesota Wild, 2-0.)

Hackett, promoted from Houston with Niklas Backstrom sidelined by a groin injury, does this before every game.

“Just visualize what I’m supposed to do. Get my headphones on and get a little focused,” Hackett said.

It’s safe to say Hackett visualized the Wild scoring a goal or two in his first home start, but these days, that’s asking a lot from a depleted, emotionally disabled team on the downward path toward a top-five pick in June’s draft.

“It’s tough to come back from 2-0 every game in a row,” Devin Setoguchi said. “Our starts obviously need to be better. We need to have more urgency off the bat. Otherwise we’re just chasing the entire game.”

The Wild, which has gone from fighting for a playoff spot to the sixth-fewest points in the NHL (66), doesn’t have the offensive wherewithal to respond to these early goals. It was shut out in consecutive home games for the first time in more than 10 years (Jan. 30 and Feb. 8, 2002).

“I was a little nervous, first time playing in this building,” said Hackett, 21, who made 34 saves. “I started off a little slow, but after that I got more relaxed.”

Coach Mike Yeo didn’t blame Hackett one iota. Instead he criticized his team for yet another lousy start. “We were tentative and were on our heels, we’re not alert on loose pucks and we’re not aggressive and physical like we need to be, especially in our building,” Yeo said.

The Wild is the NHL’s lowest-scoring team at 2.08 goals per game. It was offensively challenged even with Mikko Koivu, Guillaume Latendresse and Pierre-Marc Bouchard. But with the three top-six forwards injured, checkers are playing top-line roles and veterans like Dany Heatley and Matt Cullen, who are working relentlessly, are being relied upon to carry the load.

When Darroll Powe, who has no goals and one assist in the past 20 games, is your second-line left winger, you’ve got issues.

In the third, Yeo scrambled his lines in an effort to jump-start the team. He again bemoaned the Wild’s execution afterward. Asked if it’s execution or simply the fact certain players don’t have the ability to execute offensively, Yeo said, “There are certain situations where maybe we don’t have the skill to make a real high-skilled play, but when it’s a matter of receiving a pass or something like that, it’s more between the ears than the ability of a player.”

Heatley, one guy with the ability to fill the net, just missed a half-dozen times. He hit the crossbar, got handcuffed, didn’t pull the trigger fast enough or was out and out robbed by Semyon Varlamov (30 saves), such as during a third-period power play when he got stoned at the goalmouth on a Setoguchi rebound.

“You’ve got to bear down and find a way to score that goal,” Heatley said.