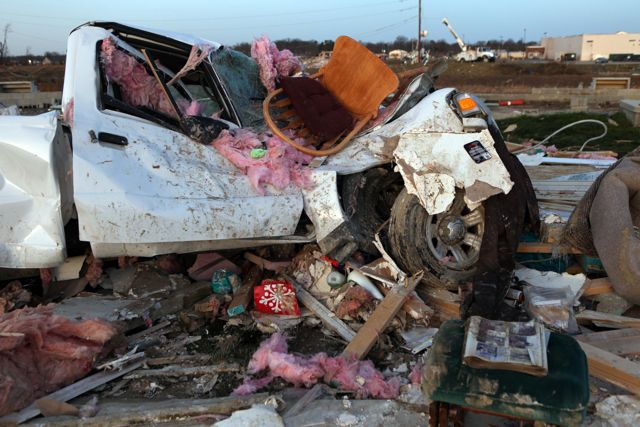 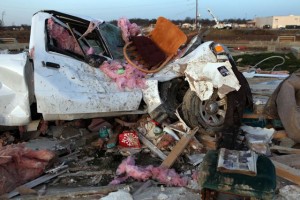 HARRISBURG, Ill. — Nowhere in this town of about 9,000 felt the heartbreak of six lives lost in Wednesday’s tornado more deeply than Brady Street.

(PHOTO: Widespread damage is seen in a destroyed neighborhood along Brady Street in Harrisburg, Illinois, on Thursday March 1, 2012.)

A short avenue known as a tight-knit neighborhood, Brady is where five of those killed in the storm had lived. Before the twister tore a nearly 8-mile path through Harrisburg and surrounding areas, 10 new duplexes stood on this street. After the storm, three duplexes remained.

“We’re in disbelief,” said Dena McDonald, daughter of victim Mary Ruth Osman, a Brady Street resident killed in the tornado. McDonald returned to the neighborhood Thursday to an empty lot that had been Osman’s home, and tried to salvage family mementos.

“There are no words to describe this,” she said, watching her husband dig through debris.

The personal effects of everyday life — family photos, bank statements, holiday cards — were strewn about the neighborhood Thursday, soaking in puddles or sticking out from collapsed roofs. As residents continued to pick through the rubble, officials announced they were preparing for yet another band of storms Friday, although the latest National Oceanic and Atmospheric Administration predictions showed the storms may not be as severe in southern Illinois.

“We’re looking at the possibility of weather tomorrow, the severity we don’t know but we have to make sure that we are prepared,” said Stan Krushas, Illinois Emergency Management Agency Regional Coordinator.

On Brady Street, residents talked about the neighborhood’s closeness, how they often invited one another for dinner and regularly would cook meals for those too ill or otherwise unable to do so for themselves, residents said.

But now, cinderblocks littered the ground like discarded Lego pieces. Refrigerators and cars were crushed beneath mountains of plywood and siding.

“It’s just devastating,” said Danny Morse, who with his wife over the past eight years built the neighborhood’s 10 duplexes. Morse, who also owns the homes, helped with the cleanup Thursday.

“One night you go to bed and everything’s fine,” he said, “and the next morning you see this. … It’s all gone.”

Nearby lay bare the concrete slab that used to anchor the home of Jaylynn Ferrell, 22, who lived next door to Osman. Ferrell, a registered nurse who worked nights in the intensive care unit at Harrisburg Medical Center, was killed in the tornado.

She had grown up in Herod, about 15 miles southeast of Harrisburg, relatives said. “A go-getter” who attended First Baptist Church in Harrisburg, Ferrell “always wanted more,” said her paternal grandmother, Ann Ferrell.

“She would always go the extra mile to better herself,” Ann Ferrell said.

Lynda Hull, 74, moved in to the duplex at 77 Brady St. about one year ago after the death of her husband. On Wednesday morning, her body was found under a collapsed wall.

“When Dwight died, she’d said God just worked everything out for her,” said her sister, Kay Bridewell, 61, of Galatia. “The duplex was beautiful, and Lynda loved her neighbors.”

A widow, Hull discovered a warm and welcoming community on Brady Street, where people looked out for one another, Bridewell said.

“She was always taking food to somebody who was sick,” said Bridewell. “My sister was a spunky lady. We referred to her as our banty rooster.”

“She was still in her pajamas,” Bridewell said. “She was probably in bed asleep; I don’t think she ever knew what hit her.”

Randy and Donna Mae Rann, a couple who lived next door and who also died in the tornado, were good friends with Hull, family members said. Hull used to joke that the Ranns, ages 61 and 66, had adopted her because they shared meals with her so often, Lyndi Bowman said as she took a break from digging through debris searching for her grandmother’s belongings.

Even though she has seen images of herself on national news broadcasts, Bowman, 21, said only the pain she feels at night from digging through the debris can convince her that the disaster that shattered the town was real.

“I keep thinking, ‘That’s not me. That was not my grandmother who died there,’” Bowman said.

Donna Mae Rann was planning to retire from her job with the U.S. Forestry Service in less than two weeks, said her brother, Neal Patterson.

Patterson said he, too, was having trouble coming to terms with the magnitude of the destruction.

“It’s like you keep replaying a movie in your mind, and it’s about somebody else’s life, not your life, and you’ll be able to switch it off and everything will be back to normal,” Patterson said Thursday, after standing on the concrete slab that once supported his sister’s home.