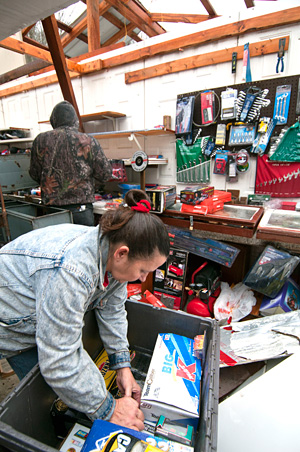 LEXINGTON, Ky. — A storm system that caused death and destruction in Illinois and Missouri also barreled into Kentucky on Wednesday, roaring through Henderson, Hardin and Larue counties in the western half of the state before hitting Russell and Morgan counties.

(PHOTO: Roxann Phipps and her husband, Donald, go through merchandise in the family booth at the 460 Flea Market near West Liberty, Kentucky, Wednesday, February 29, 2012. A severe storm damaged several buildings west of the city.)

In Hodgenville (LaRue County) about 55 miles southwest of Louisville, a tornado destroyed or severely damaged 20 houses.

Mobile homes and houses were also flattened in Henderson and Elizabethtown, officials said.

A tornado with winds of 125 miles per hour hit Elizabethtown.

In Henderson, in Western Kentucky, a tornado with winds of 90 mph destroyed five houses near the Ohio River and damaged two others. Two residents were taken to local hospitals with injuries, said Larry Koerber, the local emergency management director.

Farther west, two people were rescued after getting trapped in a mobile home that was toppled by fierce winds that hit McCracken County before dawn, said Paul Carter, the local emergency management director. They were taken to a hospital with serious injuries, he said.

Much of the damage occurred in the northern part of the county in a community called Webb’s Crossroads. The Red Cross had made arrangements for several families to stay at a local motel.

Cecile Moore, 63, said she was at her small mobile home, looking out the door to watch the weather, when her daughter called from Campbellsville and urged her to get into the underground storm shelter at her nephew’s mobile home next door.

Moore said her son, Troy Moore, came to her house and they decided to head to the shelter as the ominous storm moved in. They had been in the shelter only a couple of minutes when the storm ripped the roof and sides from her home.

“It saved mine and my son’s life,” she said of going to the shelter. When they came out, she saw that the mobile home where her nephew, Aaron Keith, lived, was torn apart. Then she saw her own home was destroyed.

Officials in West Liberty (Morgan County), about 80 miles east of Lexington, reported several buildings damaged. The most serious damage occurred at the Country Carpet outlet, which lost its roof.

Morgan County Judge-Executive Tim Conley said county officials received reports of a funnel cloud a few miles west of West Liberty. He said damage mainly was centered in that area, along U.S. 460 and Ky. 191 Angie Stacy, whose family operates Country Carpet, said furniture and carpeting in the building were soaked by rain after the roof blew away. She estimated total damage in the hundreds of thousands of dollars.

Stacy said she and her brother, Michael, stepped outside the store about 2 p.m. to check on the weather, and turned to see the roof lift off.

“I was talking to my mom on my cell phone … and about that time we saw sheets of rain behind us,” she said. “The rain whirled around to the other side of the road, and then all of a sudden we saw the roof go flying off.” Mike Callahan, hydrologist with the National Weather Service in Louisville, said Wednesday’s most severe weather cut a line just below the state’s two biggest cities.

“Both Louisville and Lexington were spared this time,” he said.

A Lexington woman was taken to the hospital with non-life-threatening injuries after lightning struck her house on Cheddington Lane, off Chinoe Road, causing a chunk of drywall to fall on her as she was asleep in her bedroom, Fire Battalion Chief Ed Davis said.

Davis said lightning apparently struck the roof near the chimney about 6 a.m., blowing a section of the roof off and loosening the 4-foot-by-8-foot piece of drywall.