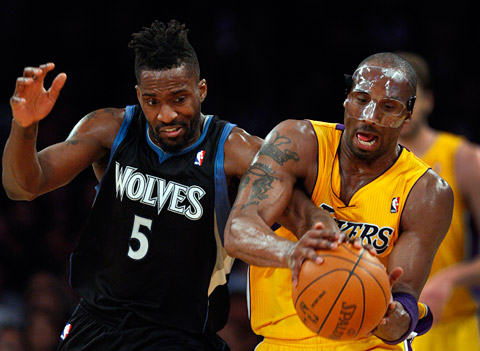 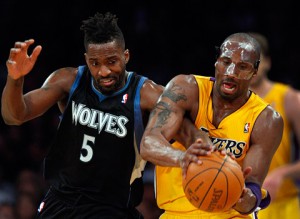 LOS ANGELES — The spotlight reflected mainly off the clear mask that protected Kobe Bryant’s broken nose as he played a day after being diagnosed with a concussion.

And Bryant performed Wednesday night with his customary star turn in leading the Lakers’ rout of the Kevin Love-less Minnesota Timberwolves, 104-85.

Bryant’s dedication, though, was just one of the positives for the Lakers in starting the post-All-Star portion of their schedule in dominant style. After struggling with limited practice time and a heavier early schedule than most teams, the Lakers looked rejuvenated Wednesday night after five days without a game.

The Lakers led by 27 points and never trailed. Bryant had 31 points, eight assists and seven rebounds, Andrew Bynum had great bounce in his step to get 13 points and 13 rebounds after his Friday knee injection, and the team defense that is always Coach Mike Brown’s primary focus was consistently attentive.

Minnesota All-Star Love was ruled out just before tipoff because of flu-like symptoms. Hurt Sunday in the All-Star Game, Bryant was cleared by neurologist Vernon Williams not long before Love wasn’t, with Williams declaring Bryant asymptomatic and bothered more by whiplash-like effect than anything else.

To that end, Bryant requested a neck massage from Lakers physical therapist Judy Seto while on the bench in the second quarter — and then got another more extensive massage early in the fourth quarter. Bryant still got summoned back into the game when the Lakers let the lead slip to 89-70 with 6:27 left.

Bryant strapped the mask back on, came in and hit the game’s next two shots.

Gone are the days of Phil Jackson beating up on one-time protege Kurt Rambis with the Lakers’ title favorites and the Timberwolves just starting to rebuild, but the result Wednesday night was the Lakers’ 17th consecutive victory over the Timberwolves. Minnesota, which beat the Clippers on Tuesday night to move to 18-17 this season, will get another shot at the Lakers on March 9 in Minneapolis.

The victory was the Lakers’ sixth in their past eight games. Said Brown before the game: “There’s a feel of confidence guys are starting to have.”