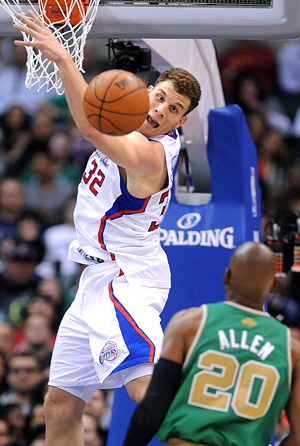 LOS ANGELES — It seems as if the loss of one player has staggered the Los Angeles Clippers, leaving them incapable of making up for his injury.

The Clippers are 8-10 since Chauncey Billups went down with a season-ending torn left Achilles’ tendon on Feb. 6, the 94-85 defeat to the Boston Celtics on Monday night at Staples Center just another loss along the way.

Chris Paul has tried to lead the way since Billups got hurt. But when Paul has an off game, as he did against the Celtics, it makes it tougher on the Clippers.

Paul had 14 points on three-for-12 shooting, and five assists.

Blake Griffin had 24 points and nine rebounds and Mo Williams had 21 points.

When the Clippers went down by 10 points early in the fourth, it looked as if they were out of this game.

They couldn’t seem to score against Boston’s suffocating defense.

Paul was not having one of his better games.

But he broke free of his slumber and the Clippers followed him.

That seemed to ignite the Clippers.

Williams got a steal and scored on a layup, tying the score at 73-73, and just like that, the Clippers were back in a game that looked as if it was getting away.

The Clippers even took a 78-74 lead on a three-point shot by Bobby Simmons.

But the Celtics refused to quit, going on a 9-0 run, capped by Pierce’s three-pointer, to take an 83-78 lead, forcing the Clippers to call a timeout with 2:47 left.

During Boston’s run, the Clippers turned the ball over twice and Paul missed a three-pointer.

The Clippers turned the ball over eight times in the fourth, one by Paul that led to a Mickael Pietrus layup for an 87-80 Boston lead with 1:33 left.

It was the second of a six-game homestand for the Clippers, and they were playing on back-to-back nights after losing to the Golden State Warriors on Sunday night. The Clippers (23-17) are 1 ½ games behind the Lakers (25-16) in the Pacific Division.

This time, the Clippers played with more energy in the first half.

And they played a lot better defense, not waiting until the fourth quarter to apply pressure, something the Clippers have done too much of lately.

Though the Celtics shot 50 percent from the field in the first half, the Clippers limited them to 39 points in opening a nine-point lead at halftime.

To be sure, the Celtics aren’t known for their offense. They are ranked 26th in the NBA in scoring and 28th in rebounding.

Still, the Clippers played defense better and they didn’t back down to the physical Celtics.

DeAndre Jordan, who had nine first-half rebounds, and Garnett had double technical fouls.

That was a side the Clippers hadn’t shown much of this season.

There is one thing the Celtics are very good at and that’s playing defense.

The Clippers found this out in the third quarter, when the Celtics put the clamps on them.

The Celtics held the Clippers to just 13 points in the third on 27.3 percent (six-for-22) shooting.

It didn’t help that Paul missed his first six shots, making his first field goal with 28.1 seconds left in the third.

But it pulled the Clippers to within 62-61 entering the fourth.