Violence suggests to US military: ‘Afghans hate us, and we don’t trust them’ 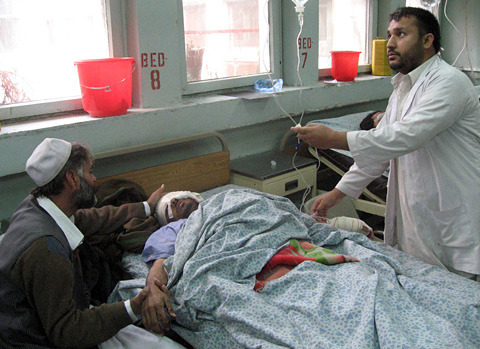 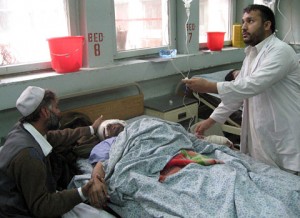 WASHINGTON — As violence continued Monday in Afghanistan over the accidental burning of Qurans by U.S. troops last week, American military officials and analysts are beginning to question whether the U.S. needs to change its mission of training Afghan soldiers and police, a key plank of President Barack Obama’s withdrawal strategy.

(PHOTO: A wounded Afghan receives medical treatments at a hospital in Nangarhar, east of Kabul, February 27, 2012. At least 10 people were killed and a dozen others injured Monday morning when a suicide car bomb went off near the gate of an airport in Jalalabad, the provincial capital of eastern Afghan province of Nangarhar, police said.)

White House and Pentagon officials said publicly that they weren’t yet contemplating a major overhaul of the plan to build a force of more than 300,000 Afghan soldiers and police officers and hand over security of the country to it by 2014 or earlier. But privately, U.S. military officers in Washington and Kabul acknowledged that the scale of violence over the past week — four American soldiers were killed by their Afghan counterparts and seven were wounded — has worsened an already uneasy relationship between U.S. and Afghan forces.

“I think the entire world shifted under our Afghan policy because of this, both in Kabul and in Washington,” said Douglas A. Ollivant, who served as a senior National Security Council official in the Obama and George W. Bush administrations.

This incident, several officers told McClatchy Newspapers, has left U.S. troops saying that they can’t keep training Afghans who may try to kill them, a growing problem that plagued the mission even before coalition forces accidentally burned several copies of the Quran in a trash fire last week. Obama and other senior U.S. officials apologized for the incident, which triggered a week of protests and attacks in which about 40 people have died.

“Afghans hate us, and we don’t trust them. We have never felt safe around them,” said a U.S. military officer who works on Afghanistan policy, who spoke on the condition of anonymity due to the sensitivity of the issue.

The mistrust exists on both sides. Some Afghan soldiers and police officers have told investigators in previous incidents that American forces are rude, culturally insensitive or hostile to them. In the wake of the Quran burnings, Afghans said they couldn’t understand how U.S. soldiers could commit such acts more than a decade into the war.

The training mission “will never succeed if they keep burning the Quran or disrespect our beliefs,” said Khan Agha, a police officer in the Sarobi district of Kabul, the capital. “They will not succeed in insulting our religion. But if they respect our holy book and our religion and focus only on training, then they can succeed.”

Earlier on Monday, at least nine Afghans died in a suicide bombing at an air base that coalition forces use in Jalalabad, in eastern Afghanistan. The Taliban claimed responsibility for the bombing and said it was in retaliation for the Quran burnings. Hours later, U.S. officials said the attacks wouldn’t derail the training mission and that they thought the violence would abate.

“I’d be less than honest if I didn’t say that things are tense here in Kabul. They certainly are,” said Navy Capt. John Kirby, a military spokesman in Kabul. “But I will tell you that it is getting calmer here.”

Marine Gen. John Allen, the commander of coalition forces in Afghanistan, continued to keep hundreds of U.S. personnel out of Afghan ministries, where they’d been on training and advisory missions, after an Afghan soldier shot and killed two U.S. service members Saturday at the heavily guarded Interior Ministry. The shooter slipped out of the building and remained at large.

Kirby said U.S. troops would train Afghans remotely, via email and telephone, until officials could improve security at the ministries. That could take weeks, officials said, and when they do return, U.S. troops probably will find more security barriers between themselves and the Afghans.

The withdrawal from the ministries was a major departure from relations between U.S. soldiers and their Afghan counterparts five years ago, when troops were ordered not to take their weapons into meetings with Afghans, in order to engender trust.

Now U.S. troops have reduced their patrols, while civilians are being told not to show their American passports and to limit physical interaction with the Afghans they’re charged with working alongside. In a new incident, chlorine apparently was found in coffee and fruit that was being served to U.S. troops stationed along the Afghan-Pakistani border, and U.S. officials are investigating whether it was an attempted poisoning.

Several officers told McClatchy that the looming 2014 withdrawal already had complicated their mission, saying Afghans already are planning for when the coalition leaves. Some U.S. officials have suggested that the Obama administration could announce an accelerated timetable to hand over security to Afghan forces at a NATO conference in Chicago in May.

George Little, a Pentagon spokesman, said repeatedly Monday that the U.S. Was taking the “long view” on the war, and he insisted that it could continue uninterrupted.

Retired Army Lt. Col. John Nagl, a counterinsurgency expert, said that a decade of war had exhausted even the most supportive Afghans. Even an advisory mission — in which U.S. forces don’t conduct offensive operations — may not be an option.

“If we are not able to restore trust between Afghan and coalition troops,” Nagl said, “then the strategy is unworkable.”