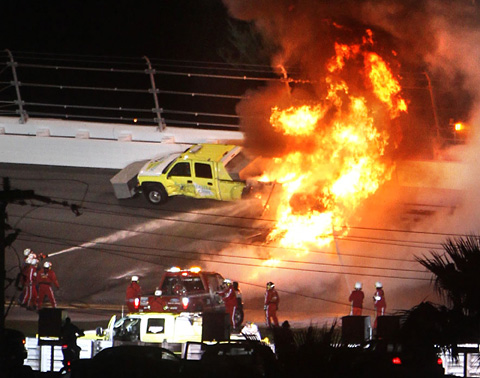 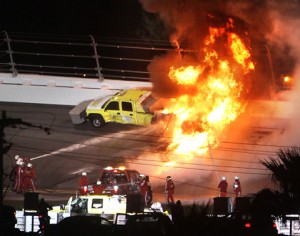 By Matt Murschel and Brentley Romine, The Orlando Sentinel –

(PHOTO: A fireball erupts from a track dryer truck after it was struck by driver Juan Pablo Montoya during a caution in the Daytona 500 at Daytona International Speedway in Daytona Beach, Florida, Monday, February, 27, 2012.)

The race, which began around 7:15 p.m. EST Monday, finally ended at approximately 12:56 a.m. Tuesday. The race was marred by 10 cautions and a long delay after Juan Pablo Montoya ran into a track drying vehicle during a caution.

The vehicle was out on the track blowing off debris. Montoya, who was running by himself trying to catch up with the pack and was getting ready to pass the vehicle, lost control, possibly because of a transmission problem, and smashed into the vehicle near turn 3, causing it to burst into flames.

Montoya was taken to the care center and released. He had an X-ray on his left foot, but said it’s “just a scratch,” and that he is OK. He was not limping or wearing any kind of boot while leaving the care center.

The truck driver was taken to the Halifax Health Center, where, according to Fox TV, he is resting comfortably and under observation.

“It just felt really strange and as I was talking in the radio the car just turned right,” Montoya told the Orlando Sentinel.

Montoya rode in the ambulance with the driver of the truck.

“I’m sure he’s pretty shaken and is going to be sore, but I think he’s OK,” Montoya said.

The vehicle has been described by Fox commentators as “a jet engine that is used to dry the track.” It uses jet fuel, which caught fire. After several minutes and multiple attempts, the track crew was able to extinguish the fire.

Montoya’s crazy wreck is just one of several nutty events during this long race weekend.

The race was originally supposed to be run on Sunday afternoon, but was delayed several times during the day because of rain and then finally postponed until Monday. The postponement was the first in race history.

The race was then supposed to start at noon Monday, but was pushed back to 7 p.m., again because of rain.

Once the race did finally begin, a couple of the sports’ biggest stars were eliminated from contention almost immediately.

Five-time NASCAR champion Jimmie Johnson was bumped by Elliott Sadler and lost control of his car on the race’s second lap, running into the wall and causing a chain-reaction wreck.

Among the other drivers caught up in the accident were Danica Patrick, defending Daytona 500 champion Trevor Bayne, David Ragan and Kurt Busch.

All drivers were OK, and Bayne and Patrick returned to the race, although they are each more than 30 laps behind and out of contention for a win. Johnson, Ragan and Busch are all out.

Later, former NASCAR champion Jeff Gordon blew his engine and left the race and Martin Truex Jr. won a $200,000 bonus for leading at the halfway point.