It’s West by a nose as Bryant breaks nose 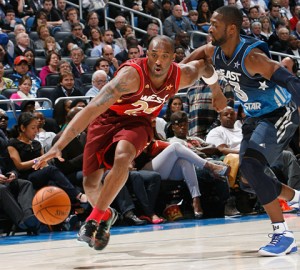 But did it come at a price?

Bryant skipped a postgame media session after his 27-point performance, and was taken for further evaluation after he said he was “experiencing headaches.” The Los Angeles Lakers announced later that Bryant had suffered a nasal fracture and would be re-evaluated Monday after he returned to Los Angeles by an ear, nose and throat specialist.

It’s believed Bryant was injured with 8 minutes 48 seconds to play in the third quarter when he received a hard foul from Dwyane Wade. Bryant sank the first free throw then went to the bench to have a trainer look at his bloody nose. He returned and made the second free throw.

About four minutes later he beat Jordan’s mark of 262 points on a breakaway slam off a pass from Kevin Durant. Bryant, who also played more than eight minutes in the fourth quarter, had 271 career points by game’s end.

Right, there was a game.

As if following the standard NBA script, it went down to the final shot, an improbable finish given that the West led by as many as 21 points. But, as these games are, few will remember who won. It was the West, 152-149.

In addition to Bryant, the game was a testament to the abilities of Durant of Oklahoma City and LeBron James of Miami. Each scored 36 points, but Durant’s team won, so he was named most valuable player.

Durant was the only West starter not from Los Angeles. Joining Bryant were teammate Andrew Bynum and Clippers Blake Griffin and Chris Paul.

Bynum played only the first 5:31 of the game but Lakers fans need not worry. Bynum, who was unsuccessful on three shots, said that it was part of the plan that he would only play the opening rotation. He received injection on Saturday to help his troublesome knee.

“It was planned,” Bynum said afterward. “It was just the way we had to do it for this to work. I’m getting the first plane out of here tonight and we have Monday off.”

Bynum said he plans to play Wednesday against Minnesota.

Griffin and Paul both played to their strengths, Paul by passing and making assists and Griffin by slamming them home. Griffin finished with 22 points on nine-for-12 shooting, including seven dunks. Paul had 12 assists and eight points including two three-pointers.

They connected with each other for the pass-and-slam three times.

“We showed some of our chemistry out there,” Griffin said. “It’s great playing with someone familiar. It’s fun playing with a guard like (Paul) and I get to do it every day in a more relaxed setting.”

Paul also recognized how well the two play together.

But Paul rejected the idea that the game might have put this scoring combination on the map.

“We’re already on the map,” Paul said. “We have two All-Star game starters. It’s just part of the game and a fun part.”

The East almost stole the fun from the West as the game wound down to the final minute. The East had closed to within one with 37 seconds to play when Griffin grabbed a miss by Russell Westbrook and slammed it home for a three-point lead, 150-147.

Wade got the East back to within one with a couple of free throws 14 seconds later. Bryant made it a two-point game with 18 seconds left, though not without some gamesmanship from Paul Pierce on the East bench.

As Bryant was preparing to shoot, Pierce taunted him with a reminder that he missed two free throws in the final seconds against Dallas last week. Bryant made one of two. Bryant wandered over near the bench and started jawing with Pierce until play resumed.

Deron Williams then missed a three-point attempt and Griffin added the final point with a free throw with 1.1 seconds to play.

“It’s great to be in it at the end and be part of it,” Griffin said. “The best part is winning.”

Even though he was basically missing at the end, had it not been for Durant the East might have run away with the game.

“It’s just exciting to be named an All-Star but to step it up another level and become MVP is only something that as a kid you dream about.”

Now the dreaming is over and it’s back to the arduous regular season. And the Lakers are hoping they will be at full strength.