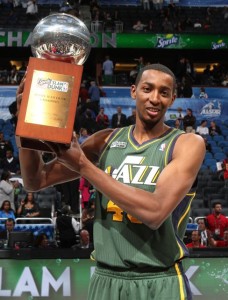 ORLANDO, Fla. — Naysayers predicted that the Slam Dunk contest at All-Star Weekend this year would be a snoozer.

(PHOTO: The Utah Jazz’s Jeremy Evans with his trophy for winning the Slam Dunk Contest during NBA All-Star festivities at the Amway Center in Orlando, Florida, on Saturday, February 25, 2012.)

On Wednesday, Evans was added as a replacement for injured New York Knicks guard Iman Shumpert.

“It’s amazing,” Evans said. “I came in, they asked me how long have I been practicing, and I think I found out maybe Tuesday, Wednesday that I was really going to be in it. So I told them. Thursday night, I came in, they gave me the 45 minutes on the court. That’s about it. And last night I went in and stayed about three.”

Evans’ top dunk came as he leapt over seated Jazz teammate Gordon Hayward and Hayward tossed two basketballs into the air. Evans caught both basketballs and slammed them home.

Fans started to leave Amway Center as Williams attempted the final dunk of the evening, and scores of people streamed out of the arena before the winner was even announced.

Each competitor made three dunks apiece, and for the first time, the winner was determined solely by fan voting, which could be done through Twitter, text message or on the league’s website.

In an interview in January, NBA Commissioner David Stern discounted the notion that the Slam Dunk contest had run its course.

“It’s only the grinches who want to say, ‘Oh, my God, that wasn’t fun enough,’ “ Stern said then.

Perhaps the league should return to the drawing board.