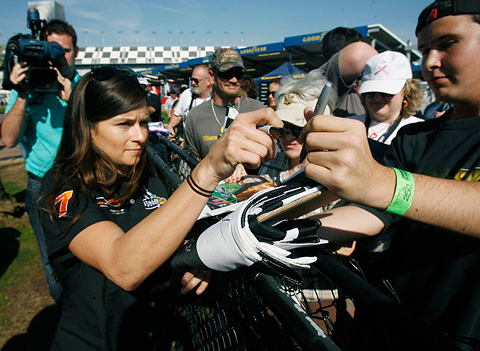 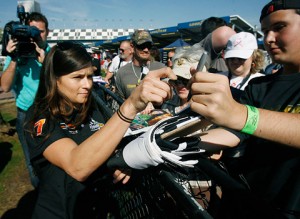 DAYTONA BEACH, Fla. — A day after crashing into the wall, Danica Patrick cracked the glass ceiling of NASCAR on Friday.

Patrick, in a scenario NASCAR must love, won the pole for Saturday’s Nationwide Series race with a lap of 182.741 mph in her No. 7 GoDaddy.com Chevrolet.

Sitting next to her in the second position is defending Daytona 500 champion Trevor Bayne, who clocked a lap of 182.715 in the Roush Fenway Racing No. 60 Ford, previously driven by Carl Edwards.

Patrick, who was victim of a frightening crash in a Gatorade 150 Duel on Thursday, became the second woman to win a Nationwide Series pole and the first since Shawna Robinson at Atlanta in 1994. They are the only women to have won a pole in NASCAR’s three national touring series.

“I was thinking about how disappointing (Thursday) was and how happy you can be 24 hours later,” said Patrick, who won her first career pole in the IndyCar Series in 2005 at Kansas Speedway.

“I don’t think about it from a girl perspective. I’ve been taught from a young age to want to be the best driver, not the best girl.”

After six seasons in IndyCar, where she won one race and became the first female to lead laps at the Indianapolis 500, Patrick will be a full-time NASCAR driver this season, running a full season in the Nationwide Series for JR Motorsports and 10 Sprint Cup races for Haas-Newman Motorsports, including Sunday’s Daytona 500.

“It’s very cool to be on the pole,” said Patrick, 29. “But it’s going to come down to drafting, and being good at that, and being good at swapping and keeping the engine cool and running in a pack and staying connected (with drafting partners) and strategy.”

Patrick has made 25 starts for JR Motorsports during the last two seasons. Her best finish was fourth last year at Las Vegas â€” the best finish by a female in a NASCAR national race.

Sadler, an 18-year-veteran, paid Patrick the ultimate compliment: “In the last 24 months, I would say she is by far the most-improved driver we have on the whole circuit, counting all three series.

“You can’t think of two bigger names to have on the front row, with Trevor coming off the 500 win last year and Danica making her full season debut here at Daytona.”

Certainly, Patrick’s presence on the pole will attract a bigger television audience today than the typical Nationwide race.

Neither Bayne nor Sadler minds being cast as backup s to Patrick’s lead role.

“If we run up front and win races, we’ll get all the attention we need.”