This news story was published on February 24, 2012.
Advertise on NIT • Subscribe to NIT 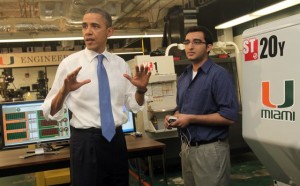 WASHINGTON — President Barack Obama tried to deflect criticism over rising gas prices on Thursday, as he accused Republicans of cheering the bad economic news and asked for patience from Americans anxious about the cost.

“It’s the easiest thing in the world to make phony election-year promises about lower gas prices,” Obama told a crowd at the University of Miami. “What’s harder is to make a serious, sustained commitment to tackle a problem that may not be solved in one year or one term or even one decade.”

The president’s remarks were his first on an issue that has emerged both as a potential threat to the nation’s increasingly upbeat view of the economy and as a cudgel for his political opponents. Amid concerns over the access to oil from Iran, prices in the U.S. have jumped to an average of about $3.60 per gallon for regular gasoline, up from $3.20 a year ago.

Analysts note that such price swings are generally driven by the cost of crude oil on the global market, leaving a president with few options. Still, the White House is mindful that presidents inevitably are blamed for things they can’t control.

Administration officials say they believe Americans are tired of the cycle of blame and contend any political damage will be limited once prices recede. In the meantime, Obama is moving to counter the critics.

The president was once one of those critics. As a senator and presidential candidate in 2008, he blasted President George W. Bush and Sen. John McCain — Obama’s Republican rival for the White House — for policies he said favored “Big Oil,” while Democrats called for an investigation into price manipulation.

Bush countered that there was “no magic wand” to reduce prices, a notion echoed by Obama today.

“There is no silver bullet; there never has been,” Obama said.

In another flashback to the last campaign, Obama revived his dismissal of Republicans’ demands to expand drilling, a policy captured in GOP vice presidential candidate Sarah Palin’s call to “Drill, baby, drill.”

Characterizing Republicans’ energy policy, he said: “Step one is drill, step two is drill, and step three is keep drilling. You know that’s not a plan — especially since we’re already drilling. That’s a bumper sticker.”

Republican candidates are, indeed, ramping up their attacks on Obama and calling for more drilling. Former House Speaker Newt Gingrich is airing an infomercial devoted entirely to gas prices. On Thursday, he called the administration “anti-American energy” and said he would aim to bring gas prices down to $2.50 per gallon. Rick Santorum blames Obama’s “radical environmental policies” for the increase.

Republicans believe Obama has left himself open to attack after refusing to permit the Keystone XL pipeline, which would carry oil produced from tar sands from Canada to Texas. They argue he was bowing to environmentalists.

The administration has said it could not issue the permit before the Feb. 21 deadline set by Congress.

And on Thursday, Obama said that his administration had approved “dozens of new pipelines, including from Canada” and that oil production had risen during his three years in office.

But the rise in production, like the spike in prices, has little to do with this administration’s energy policies, said David Pumphrey, energy analyst at the Center for Strategic and International Studies and a former energy official in the George W. Bush administration.

Increased production today is largely the result of entrepreneurial investment undertaken several years ago, he said.

“The reality is, oil wouldn’t flow through the Keystone pipeline, once it gets approved, for at least another 18 months — and that’s quick,” Pumphrey said. “Offshore drilling may take up to 10 years to come online. In the short term, your tools are limited, and the biggest one is to draw oil from the Strategic Petroleum Reserve.”

White House officials have not ruled out that option but have declined to comment in detail.

One Response to Obama scoffs at critics on gas prices, defends energy policy