Lin-sanity takes a break as Heat controls the Knicks 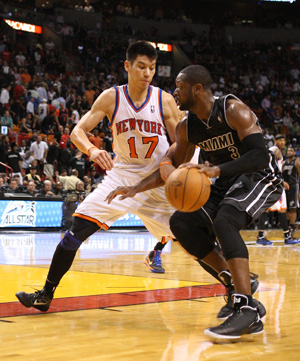 Jeremy Lin? He was present but hardly his typical presence.

Amid a playoff atmosphere at AmericanAirlines Arena, the Miami Heat motored into the All-Star break with a 102-88 victory Thursday night over the New York Knicks.

Not this time, not with the unceasing focus of the Heat defense. The breakout Knicks point guard closed with eight points on 1-of-11 shooting, three assists and eight turnovers.

“It’s not a specific plan,” Heat coach Erik Spoelstra understated of how the Heat defended Lin. “What we wanted to do was treat him with the adequate respect he deserves.”

Instead, it was more of a case of a statement victory by the Heat’s Big Three, with Dwyane Wade, Chris Bosh and LeBron James leading the way.

“Tonight, it all came together.”

Wade added 22 points, with Bosh leading the way with 25.

“We just wanted to come out and dominate the game,” Bosh said.

It was the Big Three at their Big Three collective best, the first time this season all three have scored 20 in the same game.

“When we’re all three playing well,” Bosh said, “that kind of feeds energy on this team.”

With center Joel Anthony clearing up any defensive lapses at the rim with his five blocked shots, the Heat extended their winning streak to eight, all by at least 12 points, as they now head into the All-Star break, their next game not until next Thursday’s start of a three-game western swing against the Portland Trail Blazers.

“The atmosphere was great,” Anthony said, “we wanted to step up.”

With celebrities in place, from Jimmy Buffett to Floyd Mayweather, the Heat made it 19 victories in their last 22 games behind a stout defense that forced 15 first-half turnovers and then limited the Knicks to 4-of-15 shooting in the third quarter.

“We certainly are not getting into the conjecture (of) are we peaking,” Spoelstra said. “It’s about playing to your potential, trying to improve. And we don’t know what our ceiling is.”

The Heat pushed their lead to 14 in the third quarter, with their signature sequence an Anthony block of a Lin shot and then a Battier 3-pointer on the other end that produced a 75-62 Heat lead.

“That got the crowd into it.” Battier said.

Anthony kept them in it.

“Joel Anthony is one of the cornerstones to what we do,” Spoelstra said.

The Heat took an 80-66 advantage into the fourth quarter.

Despite spending much of the day in the area, including an address at the University of Miami, President Obama was not among the high-end crowd.

“In another life, I would be staying for the Knicks-Heat game tonight, then going up to Orlando for NBA All-Star weekend,” he said at the University of Miami. “But these days, I’ve got a few other things on my plate. Just a few.”

The Knicks now clearly also have a few things on their plate, namely an opponent that swarms Lin, forces turnovers and is able to step up defensively when needed.

“The speed and the athleticism … credit to them,” Lin said. “Hopefully when we play then next time, it can be a different story.”

At times Thursday, it could have been argued the Heat possessed the game’s two best point guards, with Norris Cole offering a solid, 10-point effort off the bench after starting point guard Mario Chalmers found himself in foul trouble. It was Chalmers’ early defense, however, that set the tone.

Lin wasn’t the only Knick who struggled. Carmelo Anthony shot 7 of 20 for New York, with Knicks power forward Amare Stoudemire committing six of the Knicks’ 19 turnovers.

“We just probably played arguably the best team in the NBA,” Knicks coach Mike D’Antoni said. “That set a bar to get up to.”

Yet it was Spoelstra who said his team could use some time off now.

“This has been about a three-week push for us and it’s a good way to end before the break,” Spoelstra said. “I think everyone in that locker room need a handful of days.”

The Heat came out with furious defensive pressure, particularly smothering the pick-and-rolls the Knicks were running with Lin. But despite forcing nine first-quarter turnovers, the Heat were only able to take a 24-20 edge into the second period.

The Knicks kept up the turnover binge in the second period, with those 15 at the intermission, but still were able to stand within 51-47.

Lin and Knicks forward Amare Stoudemire each had six first-half turnovers, the most by a player against the Heat in a first half this season, but New York was able to hang close with fierce defense and three first-half 3-pointers from backup forward Steve Novak.

“We played a team with more time, they are going to improve,” Spoelstra said. “They will continue to get better.

“We have to get better, as well. We can’t stay where we are.”