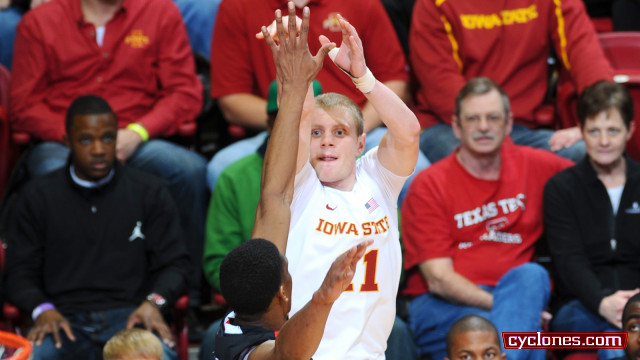 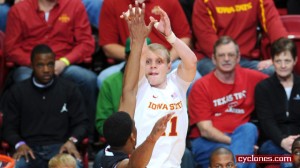 AMES, Iowa – The Iowa State men’s basketball team overcame a 32-28 halftime deficit on Wednesday night at Hilton Coliseum to beat Texas Tech 72-54. The Cyclones continued their trend of sharing the ball to get wins, tallying 16 assists on 25 baskets, and ended with four players in double figures. Senior Scott Christopherson and sophomore Melvin Ejim led Iowa State with 17 point each.

Iowa State (20-8 overall, 10-5 Big 12 Conference) forward Royce White flirted with a triple-double with 13 points, 10 rebounds and eight assists.  The Minneapolis, Minn., native took over the game during a decisive six-minute stretch with just over 12 minutes remaining in which he scored six points and passed out four assists.

The Cyclones came out of the lockerroom firing on all cylinders, and it took just over a minute to retake the lead at 35-34 with 18:43 remaining. The two teams traded the lead until the 16:30 mark when the Iowa State offense began to revolve around White. The sophomore contributed on eight consecutive scores, either getting the points himself, or handing out the assist.

Senior guard Chris Allen was the fourth Cyclone to score in double-figures, with 12 points. Allen shot 5-10 from the floor to help the Cyclones scoring punch.

The Red Raiders were led in scoring by forward Jaye Crockett, who came off the bench to score 17 points. Ty Nurse chipped in with 15 points, all coming in the first half.