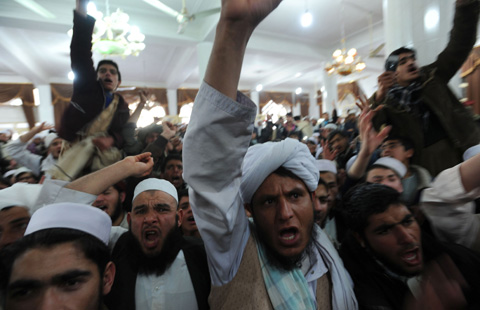 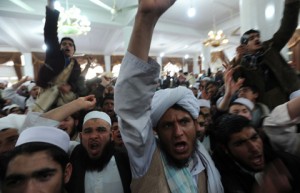 KABUL, Afghanistan — A man in an Afghan army uniform shot to death two U.S. troops Thursday and then fled into a crowd of anti-American demonstrators outside their base, Afghan officials said.

(PHOTO: Afghan men shout slogans during a demonstration against Koran desecration in Herat, Afghanistan, February 23, 2012. The protests over the Quran burning by U.S. military have entered its third day on Thursday. During Wednesday’s demonstrations, seven people were killed and 30 others sustained injuries.)

The NATO force confirmed that two of its service members had been slain in eastern Afghanistan, without disclosing their nationalities or providing details about the circumstances.

Afghanistan has been racked this week by protests over the apparently inadvertent burning of copies of the Koran, the Muslim holy book. But even before the current outbreak of unrest, turncoat shootings had systematically eroded trust between Western and Afghan forces, with dozens of attacks taking place over the last two years.

The Taliban movement, in a statement, urged more members of the Afghan police and army to rise up against their Western mentors.

Thursday marked the third straight day that Afghans took to the streets to express outrage over the burning of discarded copies of the Muslim holy book at a sprawling U.S.-run military installation north of Kabul. A joint U.S.-Afghan investigation into the incident is under way and Western troops across Afghanistan are undergoing training on the proper handling of religious materials.

At least 13 people have been reported killed in the ongoing unrest, which broke out after Afghan laborers at the Bagram air base discovered late Monday that discarded Korans were being disposed of in the incinerator used to burn trash.