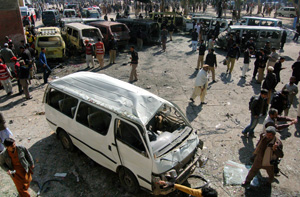 ISLAMABAD, Pakistan — A car bomb tore through a crowded minibus depot in the northwest city of Peshawar and killed at least 13 people Thursday, ending weeks of calm in a city that historically has been a magnet for militant violence.

(PHOTO: Police and emergency workers search the blast site after least 15 people were killed and over 30 others injured when a bomb targeted a bus stop in Pakistan’s northwest city of Peshawar, Thursday, February 23, 2012.)

About 100 pounds of explosives, including artillery shells, were packed into a Honda City car that was detonated by remote control, said Peshawar Police Chief Imtiaz Altaf. The depot, which routinely bustles with hundreds of passengers heading to or from Pakistan’s troubled tribal areas, was littered with rumpled frames of minibuses.

Police officials said at least 40 people were injured in the blast. At least two of the dead were children. No militant group claimed responsibility for the attack.

Peshawar, a city of 3.6 million, is perched on the edge of Pakistan’s militant-infested tribal region along the Afghan border. The Pakistani Taliban, the country’s homegrown insurgency, has its strongholds in the tribal areas and periodically carries out strikes against Pakistani security installations as well as civilian targets, including mosques and markets.

Militant violence has tapered off in Peshawar and other parts of northwest Pakistan in recent months. U.S. drone strikes on militant compounds have taken their toll on insurgent groups, and in recent weeks the Pakistani Taliban has suggested it may be willing to negotiate with the Pakistani government.

Overall, the number of people killed in terrorist attacks in Pakistan has dropped steadily, from 3,021 in 2009 to 2,391 last year, according to the Pakistan Institute for Peace Studies.

A bomb blast last month in the Khyber tribal region killed at least 29 people at a bus terminal. Also in January, the Pakistani Taliban claimed responsibility for killing 15 Pakistani paramilitary troops that they kidnapped from a fort near the Afghan border in December. A few days later, the bodies of 10 other paramilitary soldiers abducted by militants Dec. 24 from their base in the Orakzai tribal region were found near the Afghan border. Authorities said the Pakistani Taliban was responsible for the soldiers’ killings.