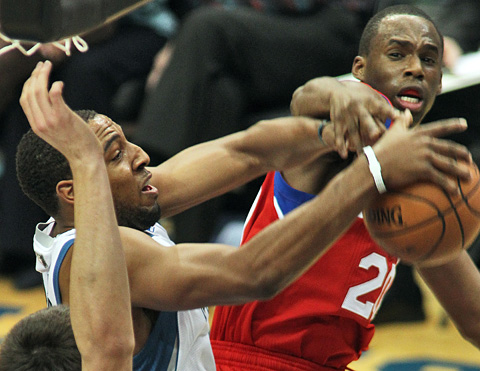 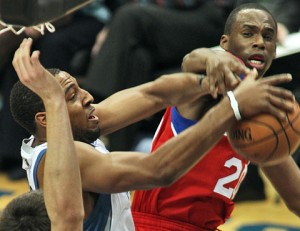 MINNEAPOLIS — When they tally up the wins and losses at the end of the season, the joy or disappointment that factors into each game in the NBA season is meaningless.

But if it did mean something, the 92-91 setback the 76ers suffered Sunday night against the Minnesota Timberwolves at the Target Center would rank way up there.

(PHOTO: The Minnesota Timberwolves’ Derrick Williams, left, and the Philadelphia 76ers’ Jodie Meeks battle for a rebound during game action at the Target Center in Minneapolis, Minnesota, Sunday, February 19, 2012. The Timberwolves defeated the Sixers, 92-91.)

The lead changed hands 11 times in the fourth quarter, the last time coming with one-tenth of a second to play. Fouled by the 76ers’ Andre Iguodala, who had gone over to help defensively, Minnesota all-star Kevin Love sank a pair of free throws — tying the game and securing the victory — to extend the Sixers’ losing streak to a season-high three games.

The Sixers appeared to be on the way toward victory. Love rebounded Lou Williams’ missed 19-footer, and the Timberwolves called timeout with 3.6 seconds to play and the Sixers on top, 91-90. When play resumed, the Timberwolves got the ball to Love, who finished with 20 points and 15 rebounds. Iguodala fouled Love, who had the ball at point-blank range.

“He looked like he had his man beat, so I helped,” said Iguodala, who finished with 13 points and seven rebounds. “I thought I tied him up and forced a jump ball. They saw it differently, so they got two shots and won the game.”

That wasn’t the first time the last possession of a game worked against the Sixers (20-12), who play at Memphis on Tuesday and at Houston on Wednesday. Sixers coach Doug Collins, after watching his team win just about every statistical category, rattled them off.

“We’ve had four games like that, and we’ve lost four of them,” said Collins, recalling last-second game-winners by Andre Miller, Deron Williams, and Chris Paul. “It’s a shame. We haven’t been able to get that critical stop.

The Timberwolves, who trailed most of the game and got their first lead late in the third quarter, pulled the trigger on 26 free throws and connected on 23. The Sixers, who had 10 more points in the paint (46) than Minnesota, attempted just 10 free throws and converted eight.

“It’s kind of frustrating, because it’s three in a row and we’re kind of sliding a little bit,” said Lou Williams, who finished with 13 points. “I think we played an aggressive game and I think we attacked the rim just like they did.”

Unaware that the Timberwolves (16-16) went to the line 16 more times until someone told him, Williams, upon hearing the disparity, shrugged.

“We attacked the rim just like they did,” he said.

Jrue Holiday led the Sixers, who were up by 11 points in the first quarter, with 20 points on 10-for-20 shooting.

Love had much better support on Sunday. Rookie point guard Ricky Rubio finished with a career-high 22 points and handed out five assists. Center Nikola Pekovic finished with 17 points and nine rebounds, and Jose Barea came off the bench to contribute 14 points.