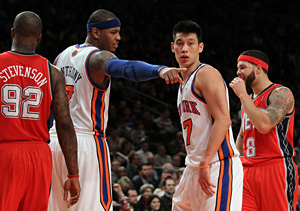 NEW YORK — Apparently, the Nets have found the cure for a team playing its third game in three nights, and five games in six nights.

But less than 24 hours later, here they were in Madison Square Garden, pulling away for a 100-92 win over one of the hottest teams in basketball.

A big part of that, if you listen to coach Avery Johnson, was because of the Garden crowd. Before the game, he said he wanted his team to feed of the crowd’s energy, even if it was directed against the Nets.

“This home crowd in the Garden, that’s what it’s all about,” Johnson said. “They’ve got a lot of energy here. When you haven’t won a playoff series in 10 years, they’ve kind of been starving for this. So there’s a lot of excitement here in the building.”

Though the Nets fed off the energy early, they spent most of the second half stifling it. Williams had a lot to do with that, putting together a remarkable performance. He finished with a season-high 38 points on a career-high eight three-pointers.

He demoralized the Garden crowd so badly in the third quarter, when he scored 18 points — including 12 in a row — that the New York fans didn’t even bother booing him when he went to the line at one point.

It isn’t the first time in the last few days that the Nets have embraced a tough situation and made the most of it. Just about 48 hours before their impressive showing at the Garden, the Nets beat up on the Chicago Bulls at United Center. The Bulls had come into that game with the best record in the NBA; The Nets had been on an eight-game losing streak.

“We can’t turn the ball over,” Johnson said of his team, which had 17 turnovers against the Knicks — most of which came when the home team made a late run. “I thought we did a nice job of that in Chicago, getting off to a good start not turning the ball over. And we probably played (well) about 40 to 42 minutes of that game, and we’re going to need to do that (against New York).”

Playing a complete game on the road hasn’t been the problem for the Nets, who are 7-12 away from Prudential Center this season.

If they could just figure out how to play better at home, where they’re 3-12, the Nets might be able to turn around what has been a frustrating season so far.