Obama calls election ‘make or break’ for the middle class 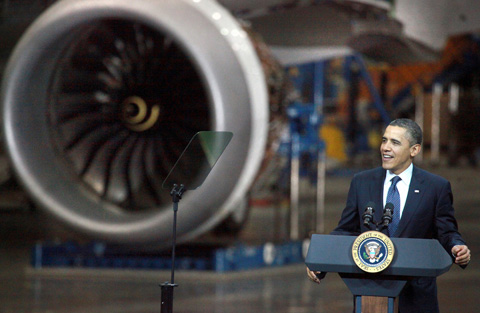 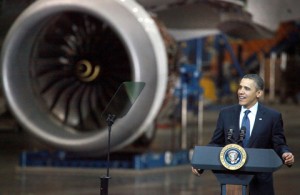 By Jim Brunner and Dominic Gates, The Seattle Times –

SEATTLE — President Barack Obama called the 2012 election a “make-or-break moment” for the middle class Friday during a campaign swing through the Seattle area, rallying supporters at two pricey Eastside fundraisers and touring Boeing’s Everett plant to promote his plans to revive American manufacturing.

Obama touched down at Paine Field Friday morning and toured a United Airlines 787 at the end of the Dreamliner assembly line, pronouncing the dimmable windows in the plane “pretty spiffy.”

Several hundred Boeing workers at the widebody jet plant caught their first glimpse of the president as he descended the steps of the 787.

Addressing the receptive crowd, Obama touted his efforts to protect domestic manufacturers, including a proposal to change federal tax policy to reward companies that keep jobs in America — and take away tax breaks for those that move work overseas.

Despite Boeing’s record of foreign outsourcing in the last decade, the president gave the company credit for its more recent recognition of the value of its U.S. workforce.

“If you’re a business that wants to outsource jobs, that’s your choice. But you shouldn’t get a tax deduction for doing it,” he said. “That money should be used to cover moving expenses for companies, like Boeing, that decide to bring jobs home.”

Obama also announced moves to strengthen the powers of the federal Export-Import Bank, which helps finance Boeing’s international sales. Fred Hochberg, chairman of the bank, accompanied the president on the trip.

Obama cited the bank’s financing support for Boeing’s sale of 230 jets to Lion Air of Indonesia, finalized just last week. “That was one of the biggest deals Boeing had ever done,” he said.

After the Boeing speech, the president finished off his latest West Coast campaign swing with two fundraisers.

The first stop was a $17,900-per-person event at the home of Costco co-founder Jeff Brotman and his wife, philanthropist Susan Brotman, where about 70 guests ate a lunch made by renowned local chef Tom Douglas and listened to several songs performed by Natalie Cole.

The guests, including Microsoft co-founder Bill Gates, had a chance to chat one-on-one with Obama and have their photo taken with him.

Obama told the well-heeled donors that much of America was still struggling. He said “the stakes are higher” than 2008, when “everybody recognized that change had to happen.”

This year, Obama said, he and his Republican opponents have “fundamentally different visions on the direction the country should go.”

“You’ve got a party that denies climate change even exists, rather than debates how to address it,” he said.

Obama referred to Gates three times during his remarks, praising Gates’ ideas about how a technological revolution will be needed to solve the nation’s energy problems.

After leaving the Brotman estate, Obama stopped at nearby Medina Elementary School, where children had been waiting for more than two hours to see him.

“Hey guys, you’re all so wet!” Obama told the students. “I wouldn’t have had you stand out here if I knew it would be raining.”

The president’s final campaign stop was at the Westin Bellevue, where he was introduced by Peter Aaron, the owner of Seattle’s Elliott Bay Book Co., who credited a federal small-business loan program with helping keep his bookstore from closing following the 2008 economic crisis.

About 450 donors paid $1,000 each to hear Obama, and up to $5,000 for a photo with the president. The campaign did not provide an estimate of the money raised during the visit.

Obama urged the crowd to “think about what change looks like,” boasting of his administration’s accomplishments over the past three years despite staunch Republican opposition. He cited the rescue of the auto industry, passage of a comprehensive health care law “after a century of trying,” and the payroll tax cut, which Congress on Friday agreed to extend.

Obama drew applause when he noted the end of the “don’t ask, don’t tell” ban on gays serving openly in the military. But he did not mention gay marriage, which became law this week when Washington Gov. Chris Gregoire signed legislation that made the state the seventh to legalize same-sex marriage. (Obama has not backed gay marriage.)

Giving a hopeful view of the economy, Obama said “the recovery is accelerating, America is coming back.”

Attacking the Republican presidential field, Obama ripped their calls for paring back Wall Street regulations and maintaining tax cuts for the wealthy. He framed the election as “a make-or-break moment for middle-class Americans and those who want to get into the middle class.”

Obama said the country needs to reinvest in schools, transportation and manufacturing even during the hard times.

“Now he’s talking about public investment, but he’s using borrowed money. Are the investments going to be similar to Solyndra?” Wilbur said, referring to the bankrupt solar-energy company that went bust after a $500 million federal loan guarantee.

Following the Bellevue event, Obama hopped into a motorcade headed back in pouring rain to Air Force One for a return flight to Washington, D.C.