This news story was published on February 19, 2012.
Advertise on NIT • Subscribe to NIT 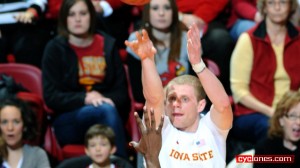 Iowa State (19-8 overall, 9-5 Big 12 Conference) used a decisive 13-0 run in the second half to break open a close game while recording the season sweep over the Sooners. It marks the first time since 2001 that the Cyclones have swept two teams (Texas A&M) in league play.

Christopherson buried a three in the run, scoring 12 points in the first half to help ISU take the lead at the half.

Iowa State was empty on its first five possessions in the second half, allowing the Sooners to close the gap to 37-33. Royce White ended the scoring drought to put ISU back up, 39-33 with 16:28 remaining in the game.

A Christopherson 3-pointer and a Gibson basket pushed the Cyclone lead back up to nine points (44-35) with 12:12 left in the game.

It was still a five-point game (46-41) with 11:03 remaining until the Iowa State went on a 13-0 run in three minutes. Christopherson hit two treys and McGee added another on three-straight possessions to put ISU up 59-41 with 8:41 left.

Iowa State made 11 3-pointers in the game, the 12th time this season where the Cyclones made 10 or more treys in a game. The Cyclones were 26-of-52 from 3-point range in two games vs. the Sooners this season.

Iowa State remains at home to play host to Texas Tech on Wednesday. Tipoff is set for 8 p.m. CST on ESPNU.