Suspect in US Capitol bomb plot a Moroccan immigrant 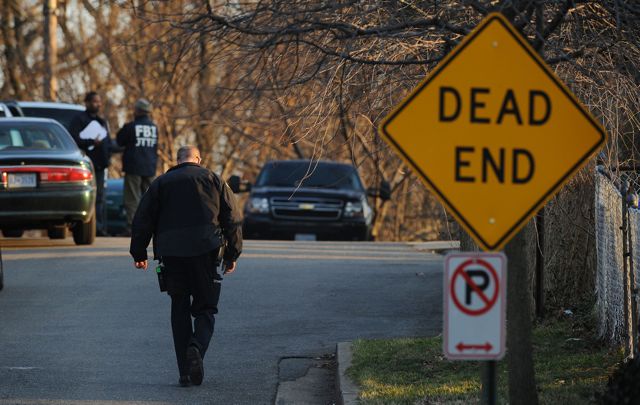 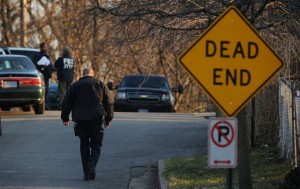 WASHINGTON — An immigrant from Morocco armed with a jammed automatic weapon and wearing a suicide vest packed with what he thought were explosives was arrested Friday near the U.S. Capitol building in Washington, officials announced.

(PHOTO: FBI Joint Terrorism Task Force agents conduct a terrorism investigation at a house on Friday, February 17, 2012, in Arlington, Virginia. The search is related to the arrest earlier in the day of a Moroccan man by the FBI who planned on conducting a suicide attack on the U.S. Capitol.)

Amine El Khalifi, 29, who allegedly had overstayed his visa after arriving in the United States when he was 16, was charged with attempting to use a weapon of mass destruction against government property. FBI agents had been closely monitoring him for more than a year in an undercover sting operation.

An affidavit described El Khalifi strutting around a hotel room with the gun and vest, watching himself in the mirror as he practiced how to pull the trigger and detonate the vest bomb by calling a cellphone number.

He also allegedly discussed hitting military targets near the Pentagon and a restaurant during the crowded lunch hour in Washington. But eventually he settled on the Capitol, authorities said, planning to shoot his way inside and detonating the bomb. He reportedly told undercover FBI agents he “would be happy killing 30 people.”

He appeared briefly in federal court in nearby Alexandria, Va., where most of the investigation was handled, but did not enter a plea. He faces life in prison if convicted.

According to Neil MacBride, the U.S. attorney in Alexandria, El Khalifi believed he was working for al-Qaida. MacBride said El Khalifi “devised the plot, the targets and the methods on his own.”

He was arrested Friday morning in a parking garage near the Capitol building after taking the MAC-10 automatic weapon from a van and strapping on the bomb vest. But both the weapon and explosive device had been rendered inoperable, authorities said.

He then walked alone from his vehicle toward the Capitol building just two blocks away, officials said, “where he intended to shoot people and detonate the bomb.” But agents arrested him before he made it out of the garage or could approach the Capitol, where lawmakers were busy voting on a $150 billion economic package to extend the payroll tax cut.

Twenty people have been arrested in the last year plotting terror attacks in this country, many of them after the FBI was tipped off by their friends or associates and then placed under surveillance by undercover agents posing as al-Qaida operatives.

A Massachusetts man of Bangladeshi descent, Rezwan Ferdaus, was arrested in September for conspiring to fly deadly model planes into the Pentagon and the Capitol, and Farooque Ahmed, a Pakistani American from Virginia, was given 23 years in prison for plotting to attack Washington area subway stations. According to Steven W. Hersem, supervisor in the FBI’s Washington Field Office’s Joint Terrorism Task force, agents first learned of El Khalifi in January 2011.They were told El Khalifi had become angry about the U.S. “war on terrorism” and the “war on Muslims.”

To get closer to El Khalifi, the FBI placed an undercover officer known as “Yusuf” close to him. The defendant allegedly talked to him about several targets — an office building in Alexandria, popular sites where U.S. military personnel gather, the home of an Army general and the Washington restaurant.

The affidavit said he cased the Capitol, searching for an entrance to shoot a guard and then detonate the bomb inside the structure. At one point last month, he purchased nails and glue and other bomb components, and drove with Yusuf to a West Virginia quarry where he allegedly test-fired explosives inside a vest.

It was then, officials said, that El Khalifi decided that, “rather than leaving a bomb in a restaurant, he wanted to conduct a suicide/martyrdom operation in which he would blow himself up in the United States Capitol building.” They added that he decided against leaving behind a “martyrdom video” because “he did not want people to know who conducted the attack.”