Career-high assists for Lin as Knicks rout the Kings 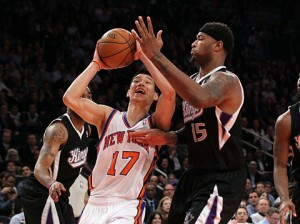 NEW YORK — Jeremy Lin’s game-winning shot from Tuesday night was a staple of every sports highlight package, though the author of that three-pointer watched the replay only once.

Back at the Garden, “Linsanity” still reigned and the Knicks returned to the .500 level as the sophomore sensation showed off another part of his game: He dished out 13 assists to go with 10 points in a 100-85 rout of Sacramento on Wednesday night.

“I think that’s where he’ll make his most progress … just reading the situation,” coach Mike D’Antoni said after the Knicks’ seventh straight win. “The next time he might have to get 30 (points) for us to win.

“Whatever he has to do for us to win, I think he will do it.”

One night after he buried the Raptors with a last-second shot in Toronto, Lin was on the bench for the entire fourth quarter. He already had done his part in dismantling another opponent in just his sixth career start.

Lin’s career high in assists was amassed in the first three quarters, and he was one of seven Knicks to finish with double-digit points.

The challenge now is “finding a way to be efficient with the minutes I’m given,” said Lin, who electrified the already charged-up Garden crowd with his court sense.

Lin had nine assists by halftime – six coming in the first quarter. He scored the first points of the game, driving the lane, drawing a foul and connecting on a three-point play.

And the vocal Garden crowd had plenty more to roar about.

Shortly after Lin found Landry Fields (team-high 15 points, 10 rebounds) for an alley-oop dunk, Lin flipped to Amar’e Stoudemire for a thundering slam that gave the Knicks their first double-digit lead.

On the final play of the first half, with the crowd noise rising, Lin diced his way through traffic and handed the ball underneath to Tyson Chandler, whose dunk gave the Knicks a 54-36 halftime lead.

Still, the 23-year-old Harvard-educated point guard was critical of his game.

“My turnovers are sky high right now,” said Lin, who had six turnovers in 27 minutes Wednesday.

Steve Novak and Bill Walker each scored 14 for the Knicks (15-15), and Tyreke Evans led Sacramento (10-19) with 19 points. The Kings’ Isaiah Thomas had 14 points and was booed incessantly each time his name was announced.

But he’s no relation to the embattled former Knicks coach and executive of the same name.

Still, that’s part of the party atmosphere at the Garden – thanks to Lin’s ascension.

“The crowd was electric tonight and we need to feed off that,” Fields said. “It’s a lot of fun. It’s really indescribable.”

And Lin believes it can only get better once Carmelo Anthony returns to the lineup.

“He’s someone who can come off pick-and-rolls, too,” Lin said, swatting back criticism that Anthony’s game might not jell with his own. “We should be more dangerous offensively.”

D’Antoni disputed that the 23-year-old guard might become worn down by this truncated NBA schedule.

And if the Knicks are making a playoff run this spring, “He’s going to have to learn to play tired anyway,” D’Antoni said.

There might not even be any rest for Lin during the upcoming All-Star weekend. According to the New York Daily News, the NBA is hopeful of adding Lin to its Shooting Stars competition.

Whatever happens, “I want to be the same person before and after. I don’t want to let anything affect me or this team,” Lin said. “If we put our egos aside and we buy into Coach D’Antoni’s system, we’re going to win games.”