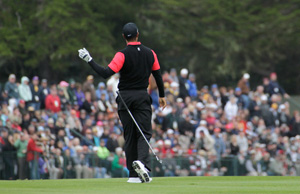 PEBBLE BEACH, Calif. — In the wake of Sunday’s Tiger-Phil showdown at the Pebble Beach corral, one prevailing image emerges.

It is of Phil Mickelson, standing over a coffin, hammer in hand, pounding down a final nail.

(PHOTO: Tiger Woods drops his club after hitting his approach shot on the 8th hole at Pebble Beach Golf Links during the final round of the 2012 AT&T Pebble Beach National Pro-Am Golf Championship in Pebble Beach, California, on Sunday, February 12, 2012.)

Will Tiger Woods ever recover from this one? Can the 64-75 final-round beating that Woods took at the AT&T Pebble Beach National Pro-Am be shrugged off as just another bad day, another step in the “process” that Tiger keeps talking about? It’s one thing to have your brains beat out, entirely another to have it happen when you are playing head to head, in the second-to-last pairing of a tournament that has a huge following, that is played in one of the most picturesque places in the world.

CBS announcer Jim Nantz keynoted things pretty well when he said, in dead-on accurate simplicity, “This is a big day for golf.”

It was Tiger and Phil, together again. You could almost imagine PGA Tour Commissioner Tim Finchem pulling up a chair in front of the TV in his Florida headquarters and rubbing his hands together in delight.

Charlie Wi, a fine golfer, led the tournament, and he was in the final pairing. Right in front were the two names that have rung the chimes with American golf fans for the last 10 years. Poor Charlie. You kind of knew he would somehow be gobbled up by one of the two monsters of golf’s midway, but to his credit, he recovered from a four-putt first green to finish second.

After Woods got himself in prime position to strike on Sunday, with lead-up rounds of 68-68-67, the feeling around the venerable Lodge and among the people who watched from the gallery amid the legendary cypress trees was that this would be Tiger’s comeback Sunday. It would be Michael Jordan-esque. Instead of standing up and proclaiming “I’m back,” he could merely do it with golf clubs in hand.

But he’s not back, unless they create a category for best three-round tour player.

The greatest golf finisher of our time can no longer finish. A player who cherished big moments, who wore red on close-’em-out Sundays that always seemed to symbolize the fire with which he took it to his foes, had a storybook setup.

He was in a final pairing with his biggest rival and nemesis, and his history was of being the guy who always drew first at high noon. He was within striking distance of the lead, and was playing on a course where he once won a U.S. Open by 15 shots and came back to beat Matt Gogel the same year in the AT&T after trailing by seven shots in the final round.

He has been close, was in contention recently in Abu Dhabi, had even won his own invitational event late last fall at Sherwood Country Club, the Chevron Challenge, which he counts as a tour win, but official stats-keepers don’t. His last official victory was two years, five months ago at the September 2009 BMW Championship in suburban Chicago.

And we all know what happened a few months after that, when he wrecked his car, and perhaps his golfing swagger, in his driveway on Thanksgiving weekend.

Sunday seemed a slam-dunk comeback. Everything was perfect. The public and the media felt it. The planets seemed to have finally aligned.

And then Mickelson thumped him, routed him, embarassed a proud athlete. When it was over, Woods’ body language spoke volumes. So did a statistic revealing that, in the last five years, in Phil-Tiger final-round head-to-heads, Mickelson has topped Woods by 19 strokes. Of course, 11 of those were Sunday.

Mickelson and Woods had each talked about the need for a fast start. Mickelson started six shots behind and after six holes, he was two ahead. Twice, he got himself in trouble with approaches that left him 30-plus feet away for par. Both times, he made the putts. One of those times, Woods had chipped in from the bunker just before. Mickelson’s bomb hit the cup like a dagger in Woods’ heart.

The legendary 18th at Pebble summed up the day for each. Mickelson, usually a wild-hair-under-the-collar gambler, played it smart and safe on the par five, which has an ocean and rocks along the left that punish the guys trying to drive it 300. Mickelson hit three irons and was 6 feet away from birdie. Woods, perhaps looking for a last hurrah, hit driver and fairway wood to the green. Putting for eagle, he clanked his birdie putt off the cup and settled for par.

Throughout, Tiger had on his game face, which became a grim face as the day went on. Mickelson had on his Phil face, which always includes a smile and warms the hearts of the fans, who packed these fairways and can’t seem to get enough of him.

At the end, it was Mickelson standing on the 18th green, surrounded by loving fans, with the Pacific Ocean sparkling in the background, Clint Eastwood standing next to him, a huge crystal trophy in front of him and a check for $1.152 million certainly nearby.

And it was Woods, body language unmistakable, peering out to the ocean as he awaited a television interview.

“I didn’t hit it as bad as the score indicated,” he said. “But it’s frustrating.”

Hope springs eternal for Tiger fans. Mickelson said that one week can change everything. Woods may still have that week. But the doubts are adding up, the evidence continuing to bring unmistakable conclusions.