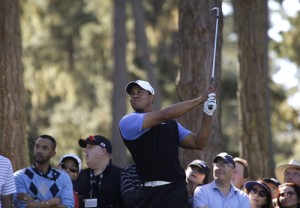 PEBBLE BEACH, Calif. —According to a new Forbes magazine poll, Tiger Woods is the second most disliked athlete in America. He is ranked just behind Michael Vick, the convicted dogfighting criminal. He is ranked just ahead of Plaxico Burress, who also did prison time, on a gun charge.

Woods’ marriage suffered an epic fail two years ago, self-inflicted. No one could defend his behavior in that regard. But does the man truly belong between two former jailbirds on a most-loathed list? The poll-takers should have shown up for Thursday’s first round of the AT&T Pebble Beach National Pro-Am. Here is what they would have seen:

—Woods hitting the ball extremely well 90 percent of the time, good enough to shoot a 4-under-par 68 at Spyglass Hill Golf Course, putting him in a tie for 15th place after 18 holes.

—Woods showing as much teeth as he has in a long while, smiling often, jogging perkily off one tee box and even chuckling when his amateur playing partner, Dallas Cowboys quarterback Tony Romo, bounced his drive off a cart path at No. 17.

—Woods picking up fan support as the day progressed, even though he has snubbed this tournament since 2002. For example, at the fifth green, the same spectator who heckled Romo after a bad chip shot with a yell of, “Don’t quit your day job,” turned around a few seconds later and shouted at Woods: “Tiger! Win this one! Win it!”

—Woods receiving a loud cheer at the ninth green, his final hole of the day after starting his round on the back nine. Then, as he walked off the green after sinking his par putt, Woods tossing his golf ball into the gallery, aimed specifically at an avid fan with a bleached-blond Afro who had followed him all 18 holes.

Now, let’s be honest. Woods is still not Mr. Warm and Friendly-Wink-At-You Fuzzy Guy. He uttered epithets after at least two bad fairway iron shots Thursday—one of them unheard by the gallery because he looked toward the ocean and yelled. But more than once, he also acknowledged voices from the crowd. At the 15th hole, one man’s “Go get-em, Tiger” drew a response of, “Thanks, bud.” On another tee box, as Woods waited for the fairway to clear ahead of him — again — during the six-hour round, he twirled his driver like a baton in an almost carefree way.

His foursome’s other pro, Arjun Atwal, said he wasn’t surprised to see Woods be so much more mellow. The injuries that have bothered him since 2009, especially a messed-up knee that required surgeries, have apparently healed to the point where Woods can wake up and not be in constant pain.

“The one thing is, he’s not hurting,” said Atwal, a friend and former neighbor of Woods’ in Florida. “When he’s healthy, he’s happy. Anybody would be.”

You can debate whether Woods has to prove a point here at the ATT. His primary focus has always been about winning major championships—his last one was the 2008 U.S. Open. And this year’s first major, the Masters, is still two months away. However, Woods has not won an official PGA Tour event since 2009, not including his December victory in his non-tour exhibition event, the Chevron World Challenge. So a victory here would certainly be meaningful.

Also, for local residents, it will be interesting to chart his progress this week. Purely by happenstance, two of Woods’ last six tournaments—and two of his last three on American soil—have taken place here in Northern California. In October, he competed at the Frys.com Open at Cordevalle Golf Resort in San Martin and had his moments but finished in a tie for 30th place.

At the Frys.com event, you could almost see Woods trying to step-by-step calculate his way through his new swing, designed to take pressure off his wounded knee. Thursday, that swing appeared to be much more fluid, smooth and powerful.

“Oh, God, it’s night and day,” Woods acknowledged. “I’d only played, what, two tournaments before Frys since coming back from the injury? So it’s two totally different deals. I’ve had way more reps in practice. I’m stronger and more explosive than I was then, feel much more comfortable with my game.”

His only Thursday glitches occurred with fairway irons, once his strength. So he’s still working out stuff. Woods hit 12 of 14 fairways off the tee but reached just 13 of 18 greens in regulation. His putter was working fairly well, though, with some sweet par-saving and birdie putts, including an excellent downhill, curving eight-footer at No. 6 that he called his best shot of the day.

Oh, he is still not the Tiger Woods of old. The galleries that once flocked three-deep around every fairway to watch him now ebb and flow in terms of crowd size. Fans now drop in and out of his round, rather than being riveted to it. We keep waiting. When will the old Tiger Woods appear, the one that made the PGA Tour bend to his will?

It’s the wrong question. The question should be: When will Woods become the best Woods he now can be? And what will that Woods look like? Over the next two days, we might well learn. As a bonus, he might even become more likable.