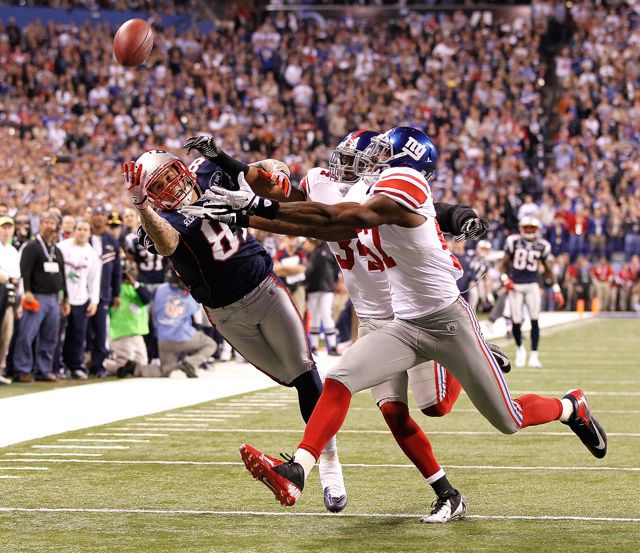 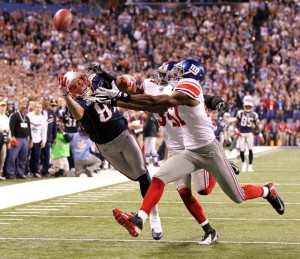 By Jeff McLane, The Philadelphia Inquirer –

INDIANAPOLIS — The New York Giants now can say their stunner over the New England Patriots four years ago was not a fluke.

Eli Manning now can say that he did not get lucky the first time around.

And Tom Coughlin can be called a coach every bit as great as Bill Belichick, whom he has beaten twice in the Super Bowl.

The Giants, who squeaked into the playoffs with a 9-7 record, put a stamp an another miracle run through the postseason with a 21-17 win over the Patriots in Super Bowl XLVI Sunday at Lucas Oil Stadium.

The Patriots could not avenge their loss to the Giants in Super Bowl XLII, when Manning pulled off the upset of the century with a game-winning drive that ruined New England’s shot at a perfect season.

In winning the Super Bowl’s Most Valuable Player award, Manning upstaged Brady, who once again was denied a fourth ring that would have tied him with Joe Montana and Terry Bradshaw as the only quarterbacks to win that many.

Brady will have to settle for being Manning’s equal on this night, although his team wasn’t. At 31, it isn’t beyond reason to suggest that Peyton’s little brother will be back on this stage with a chance at ring No. 3.

Manning was magnificent. He completed 30 of 40 passes for 296 yards and a touchdown. He did not toss an interception and completed passes to nine receivers. He ended the season in much the same way as he played it, by driving the Giants to a fourth-quarter comeback victory.

And he did it again in the Super Bowl. Manning and the Giants got the ball back late, trailing, and again they put together a drive for the ages.

It got off to a splendid start when Manning pitched a 38-yard strike to wide receiver Mario Manningham, who managed to get both feet in at the sideline. Two plays later, the pair hooked up again for 16 yards and the Giants were in field-goal range at the New England 34.

But the Giants didn’t sit on the ball. Manning hit receiver Hakeem Nicks for 14 yards. Running back Ahmad Bradshaw motored 7 yards to the 11. And then three plays later, on second and goal at the 6, the Patriots feigned playing defense and let Bradshaw walk into the end zone with 57 seconds to go.

The running back realized what was happening just before he crossed the goal line, but it was too late and he awkwardly fell in for the score.

The Giants failed on the two-point conversion, but they led, 21-17.

The drive — nine plays for 88 yards in 2 minutes, 49 seconds — mirrored the 12 plays for 83 yards in 2:07 from four years earlier. In that game-winning drive, though, New York, trailing by four, needed a touchdown and got one when Manning completed a 13-yard pass to Plaxico Burress.

In a quarterback battle for the ages, Manning once again outdueled Brady.

Brady made the first mistake of the second half when he heaved an ill-advised bomb to tight end Rob Gronkowski on the second play of the fourth quarter. The quarterback scrambled out of a sack and had time to throw, but he threw a jump ball and Giants linebacker Chase Blackburn came down with the interception at the Giants 8.

The Giants gobbled up nearly five minutes on the ensuing series, and once again crossed the 50, advancing as far as the New England 38. But the Patriots held again and forced a punt.

New England, starting from its own 8, again zoomed down the field and crossed midfield. The Patriots looked as if they would at least get a field goal out of the possession when Brady found a wide-open Wes Welker. But the ball was thrown slightly high and behind the receiver, and he dropped the ball around the 20.

The Patriots punted, the Giants got the ball back with 3:46 to go, and the rest will be etched in the minds of those who witnessed it.

The Patriots had the ball with 57 seconds left, and Brady got them to midfield, but his Hail Mary pass into the end zone wasn’t caught as time expired.

Buoyed by an end-of-the-first-half drive, the Patriots had taken a 17-9 lead with an eight-play, 79-yard scourge. This one was near effortless. New England faced only one third down — a short 1-yarder — and scored from 12 yards out when Brady connected with tight end Aaron Hernandez.

All last week there was talk of the Patriots offensive line’s having its hands full stopping the Giants’ fierce pass rush. But the New England front five — more like seven with Belichick substituting at two positions — did a masterful job protecting No. 12.

The Giants were not cowed by the Patriots, though. First, they narrowed the lead to five when Lawrence Tynes booted a 38-yard field goal. Then, after New England went three and out, they trimmed it to 17-15 just before the fourth quarter when Tynes kicked a 33-yard field goal.

But the Giants were settling for field goals while the Patriots were capitalizing on their red-zone possessions.

When the first half ended and the Patriots led, 10-9, it didn’t matter that the Giants had been the crisper team for much of the first 30 minutes or that they had outgained New England, 177-69, in total yards through the first 25.

Brady needed only a shade less than four minutes to remind everyone that he could deliver on a big stage. Backed up against their own 2, the Patriots moved upfield — with Brady the picture of precision.

He gave them a lead after the first half, but couldn’t do the same at the end of the game.