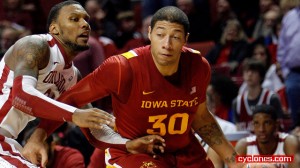 The Cyclones snapped a five-game overall losing streak against OU, dating back to 2007 and a seven-game losing streak in Norman which dated back to 1996, which was Iowa State’s last win in the state of Oklahoma. The Cyclones also surpassed their total wins mark from last season.

Melvin Ejim led Iowa State with a season-high 21 points, just one off his career-high, and a game-high nine rebounds. The sophomore has picked up his play since the start of the conference season, recording six games with double-figure scoring. After posting only one 3-pointer in his last four games, Scott Christopherson got out of his slump with 15 points on 3-of-5 shooting from long-range. Chris Babb (12), Chris Allen (11) and Tyrus McGee (10) also scored in double-figures for the Cyclones.

Ahead 38-36 at halftime, the second half got off to a slow start with both teams unable to convert many chances. Christopherson finally got the ball rolling for the Cyclones with five consecutive points to give Iowa State a 50-40 lead with 14:00 to go.

Iowa State continued to hang onto its 10-point advantage but Steven Pledger began to get his shots down as he led the Sooners on a 9-to-1 run, all on his 3-pointers to bring OU within 56-54 with 8:40 to go. Carl Blair tied it at 56-56 with a drive to the hoop, but Babb immediately responded with his fourth 3-poitner of the game to put the Cyclones back ahead 59-56.

After the Sooners reduced Iowa State’s lead to 68-65, Allen hit a big 3-pointer in the corner to give the Cyclones a six-point advantage. After a quick OU counter, Royce White posted his only field goal of the game with a baseline drive and dunk to put the Cyclones ahead six again. Andrew Fitzgerald posted a bucket and free throw to reduce the lead again but Christopherson and Ejim iced the game for the Cyclones at the free throw line.

Fitzgerald led the Sooners with 27 points on 11-of-19 shooting from the field, and Romero Osby contributed 17 points on 6-of-9 shooting. After torching the Cyclones for 38 last season, Pledger was restricted to 14 points by the Iowa State defense.

Iowa State started the game out hot from 3-point range, making six of its first eight long-range buckets. Babb and Chrisotpherson each hit two while Allen and McGee each contributed one in the first eight minutes of action.

After Fitzgerald tied the game at 22-22, Iowa State went on a 10-2 run powered by five Ejim points to give Iowa State its biggest lead of the first half at 32-24 with 6:45 to go in the first. The Sooners fought back and assembled a 12-3 run capped by a Sam Grooms jumper to give OU its first lead in over 16 minutes. The Cyclones quickly responded as Babb drained a 3-pointer, the 10th of the half for Iowa State, to give the visitors a 38-36 halftime lead.

Iowa State returns to Oklahoma Tuesday for a 6 p.m. CST contest against the Oklahoma State Cowboys. The game will be televised on ESPN2.