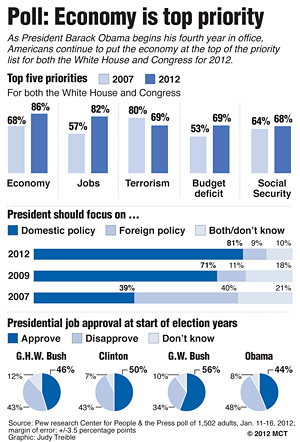 WASHINGTON — President Barack Obama delivers an election-year State of the Union address Tuesday night at a moment when the country is worried about the economy and his own prospects for re-election are mixed at best.

Americans rank the economy their top concern, and domestic issues are at their highest level on their priority list in 15 years, according to one new poll Monday.

At the same time, Obama continues to win the approval of less than half the country — lower than the last two presidents heading into their re-election years and similar to George H.W. Bush in 1992, the last incumbent to lose his bid for a second term. One big difference: Bush’s numbers were heading down; Obama’s are lackluster but stable.

Obama hopes the speech will help him frame the coming election on his terms rather than the themes heard daily from Republicans in Congress and those on the campaign trail competing for the party nomination to oppose him.

“Since President Obama took office, 1.7 million fewer people have jobs, gas prices have doubled, and the health care law is making it harder for small businesses to hire and provide health insurance to their employees,” Boehner said.

White House aides said Monday that Obama will build on a speech he gave in Kansas last month. In it, Obama laid out what he called the two competing visions, a Republican blueprint for survival of the fittest that trusts unregulated markets to lift the country, and his vision, which asks the government to take an active hand.

“The State of the Union will be a bookend to the president’s speech in Kansas last month about the central mission that we have as a country and his focus as president: Building a country and an economy where we reward hard work and responsibility, where everyone does their fair share, and where everyone is held accountable for what they do,” White House press secretary Jay Carney said Monday.

The speech, delivered to a joint session of Congress and televised nationally beginning at 9 p.m. EST, will include four key areas: aiding manufacturing, helping energy production and use, improving skills for workers, and stressing what aides called “American values.”

For their part, Americans are looking inward, more concerned about domestic issues such as jobs and the economy and less worried about foreign policy and national security.

More than four out of five Americans — 81 percent — say the president should focus his energies on domestic issues, according to a new poll by the nonpartisan Pew Research Center. That’s the highest in 15 years.

At the same time, just 9 percent say the president should focus on foreign policy, down sharply. That likely reflects the death of terror mastermind Osama bin Laden, as well as the withdrawal of U.S. troops from Iraq.

A key challenge for Obama is whether he can convince people that the economy is getting better. Unemployment has dropped but remains at 8.5 percent, higher than he promised.

“The Bush numbers were in the process of going down. Obama’s have not been good but are relatively stable,” said Pew Research Center director Andy Kohut. “It’s going to be hard for him to be re-elected with these numbers, but there are prospects for improvement if the economy improves.”