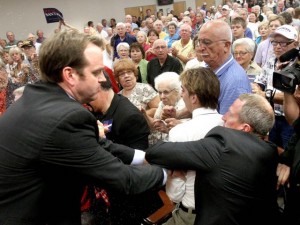 LADY LAKE, Fla. — With Mitt Romney and Newt Gingrich engaging in a dogfight, Rick Santorum on Monday soldiered on, trying to persuade some of Florida’s reddest Republicans that the top two finishers in South Carolina’s upending primary are convenient conservatives, while he is the real deal.

(PHOTO: Protesters are tackled by security after rushing the stage and throwing glitter at Republican presidential candidate Rick Santorum during a town hall meeting in Lady Lake, Florida, Monday, January 23, 2012.)

As the campaign wound down in South Carolina, the former Pennsylvania senator’s rhetoric became increasingly sharp. In one speech, he even dismissed Romney and Gingrich as Tweedledum and Tweedledee. But in Florida, he has tempered his language, becoming almost mild.

“Take a step back. Don’t listen to the hype. Listen to what all of the candidates bring to the table,” he told “tea party” members packed into an American Legion hall, suggesting the other leading contenders in the Republican presidential primary are handicapped by “inconsistencies” and “problems” that would prevent them from making President Barack Obama the issue.

Santorum later told reporters that Gingrich was hampered by high negative ratings. “It doesn’t put you in a particularly strong position to be able to go out and win this race,” he said. And he dismissed what he called Romney’s main strength: that he has been the most effective at raising money. “Money’s not going to be a problem in this race,” he said. “Whoever the Republican nominee is is going to have plenty of money to be able to run an effective campaign.”

Santorum skipped over the key points in his South Carolina speech, saying very little about his faith or his family, and instead dwelling on what he said was Obama’s desire to expand government programs and make Americans dependent on Washington.

“I didn’t decide to run for the president of the United States to accumulate power and be (the) most powerful person in America. I came so I could return the power to the people of America,” he said, sparking a standing ovation from members of the Tri-County Tea Party, which has about 2,000 members in three central Florida counties with a large number of retirees.

Santorum dodged a few awkward questions. One woman claimed Obama’s presidency was illegal, which led Santorum to smile tightly. When she claimed the president was a Muslim, he looked down at the podium and concentrated on writing on a small piece of paper. When she had finished, he said, “Well, yeah, I’m doing my best to get him out of the government.”

He reacted angrily when reporters asked afterward why he did not challenge her contention. Calling the question “a media gotcha thing,” he said, “It’s not my responsibility as a candidate to correct everybody who makes a statement that I disagree with.”

Santorum’s speech was disrupted by five protesters who shouted, “Stop the hate” and “No hate,” and threw glitter at the stage. They were quickly and aggressively tackled and hustled out of the building where they were warned they would be cited for trespassing if they returned. Gay-rights activists have interrupted several of Santorum’s recent events.

Tailoring his remarks to his audience, mostly retirees in an array of pastel shirts, Santorum said that Obama’s top-down approach to controlling Medicare spending would lead to increasingly rationed care and that Obama had made sure Congress could do little about it. “Does this sound like America to anybody?” he said. “No!” the audience shouted.

Santorum called health care the touchstone issue, using it to set himself apart from Romney, who signed a health care plan (labeled by critics as “Romneycare”) into law as governor of Massachusetts, and Gingrich, who he said supported a mandate to require individuals to have health insurance for 20 years.

He pointed out that he is the only candidate who has held consistently conservative views on the Wall Street bailout, cap-and-trade plans to cut greenhouse gases and immigration. “All the candidates in this race have the positions I have, but they didn’t always have them,” he said.

One questioner praised Santorum for a recent interview, leading him to try to figure out which of two recent ones it was. Finally, he quipped, “Both of them are great.”

Throughout his speech, Santorum’s hand-held microphone cut out. Eventually, he realized it worked best if he held it in his left hand and, when it went dead, shifted it to his right and back to his left. It worked every time, and the audience laughed every time. When a microphone failed after being handed to an audience member, he said, “You don’t have the magic I have in your hands.”