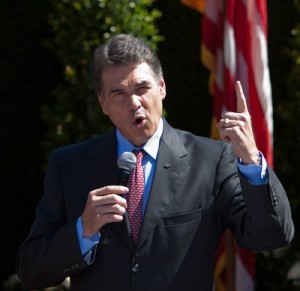 For more than a decade Texas Gov. Rick Perry has forcefully governed his state through intimidation and influence, wooing wealthy donors, trouncing election opponents and making appointments that packed the capital with loyalists.

But after dropping out of the race for the Republican presidential nomination on Thursday, Perry returned home with a new air of political vulnerability.

“The fear is gone. The aura of invincibility that surrounds him has been punctured,” said Jake Silverstein, editor of Texas Monthly, which voted Perry its “Bum Steer of the Year” on account of numerous campaign flubs, most memorably his “oops” moment during a Michigan debate when he couldn’t remember the third federal department he wanted to eliminate.

“The knives are out as they never have been before,” Silverstein said.

Many still fear Perry’s political network, and some observers say he remains a formidable figure in the Lone Star State. But some opponents say his campaign stumbles have given them an opportunity to test the governor’s mettle. The Latino electorate will be watching, too, to see if Perry disavows hard-right positions on immigration he and allies espoused on the campaign trail.

State lawmakers are already gearing up for the next legislative session, Silverstein said, with moderate Republicans more likely to challenge Perry’s opposition to state spending and fees.

“The question is whether he’s weakened himself so much that members of the Legislature who have not had a history of standing up to him might do so now,” said Craig McDonald, director of Texans for Public Justice, an Austin-based watchdog group.

Texas Democrats also will try to capitalize on Perry’s failed presidential bid in statewide races, according to Matt Angle, a Democratic strategist from Texas who founded the Washington-based Lone Star Project.

“He’s damaged goods now and there’s an opportunity to take advantage of it,” he said.

Perry’s advisers have hinted that the governor — already the longest-serving in Texas history — may run for an unprecedented fourth term in 2014, a race fellow Republicans have already staked out.

But Perry’s ham-fisted presidential campaign, coupled with Texans’ aversion to electing a “governor for life,” may scare off potential Republican donors, analysts said.

“He would be viewed as a liability in the election,” said Mark Jones, head of the political science department at Rice University in Houston.

Jones said donors may prefer to back Republicans who don’t carry as much baggage as Perry, such as state Attorney General Greg Abbott or Lt. Gov. David Dewhurst.

“He had developed an image in Texas as this political juggernaut,” Jones said of Perry. “That’s no longer the case.”

More important, some said the governor’s rightward shift during his campaign, especially on immigration, could hurt his standing with moderate and Latino voters.

“It did hurt Latinos,” DeeDee Garcia Blase, founder of Somos Republicans, a Scottsdale, Ariz.-based voter group. “We thought he was going to be more like George W. Bush.”

Garcia Blase said the best way for Perry to win back Texas Latino voters would be to apologize and distance himself from Arpaio.

But Maria Teresa Kumar, executive director of the nonpartisan Washington-based voter turnout group Voto Latino, said it was too late for Perry to apologize.

“He went to Joe Arpaio for political expediency, just like Meg Whitman brought in Pete Wilson as an adviser,” Kumar said. “You are who your friends are, and Joe Arpaio is not a friend of Latinos.”

But Jason Casellas, an assistant professor of government at the University of Texas, Austin, believes Perry stopped short of alienating Latino voters the way Wilson did in California, where as governor he promoted a 1994 ballot initiative that denied public education and social services to illegal immigrants. Perry defended the Dream Act, which would give illegal immigrants who met certain standards a path to citizenship, and the decision to grant undocumented students in-state tuition in Texas, Casellas observed.

Still, Perry is “poorly positioned to run again” for governor, according to Jim Henson, who directs the Texas Politics Project at the University of Texas and co-directs the UT/Texas Tribune poll.

A lot depends on the mind-set of Perry’s staff, as well as the governor himself. “Will they be demoralized, or relieved that it’s over and they’re back in a less unpredictable environment?” Henson said.

Silverstein, the Texas Monthly editor, puts it this way: “Everybody’s wondering what kind of Perry we’re going to get.”