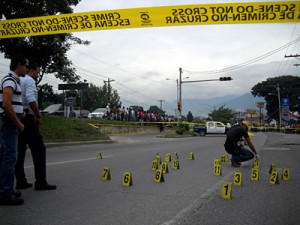 SAN PEDRO SULA, Honduras — In a city that’s just earned the title of the most dangerous in the Americas, few people dare go to the police with complaints. Rather, they view police officers with fear, scorn and disgust.

“Society has completely lost confidence in the police. The citizenry is more afraid of the police than the criminals,” said Jhon Cesar Mejia, a federal prosecutor assigned to look into abuses by the state.

In recent months in Honduras, evidence has turned up of police units involved in murder-for-hire plots, drug trafficking, extortion, auto theft and kidnapping. Distress over police corruption has grown only more intense in the three months since the dean of Honduras’ national university fingered police in the murder of her son and the widow of a slain national drug czar blamed police for his assassination.

Deep-rooted police corruption is just one reason for the deterioration of public security that’s shredding the social fabric of Honduras, El Salvador and Guatemala, a region known as the “Northern Triangle” of Central America.

Drug cartels have migrated to the Northern Triangle to escape heavy law enforcement pressure in Mexico and Colombia, flushing hundreds of millions of dollars in drug profits into the regional economy, buying off legislators, judges and army generals, and making weak institutions even weaker.

Soaring murder rates are the most tangible sign of the public security crisis.

This month, a nonprofit group in Mexico, the Citizen Council for Public Security and Criminal Justice, said San Pedro Sula had overtaken Ciudad Juarez on Mexico’s border with Texas as the most murderous city in the Americas. The 1,143 homicides that San Pedro Sula suffered last year was a rate of 158 murders per 100,000 residents, the group said.

It’s in Honduras, though, where the security crisis has most deeply altered the routines of the nation’s 8 million people and tested the viability of the state.

In this modern manufacturing city, private armies of security guards protect the well off, who live in compounds with coils of concertina wire atop high walls.

Perched atop the walls of many gated compounds are turrets with gun ports. Inside are well-armed guards ready to fend off heavy assault.

Soaring crime is only one facet of the lawlessness.

“Around here, you only comply with the law if you want to. If you don’t want to, you don’t do so, and nothing happens,” said Luis Larach, the head of the Chamber of Commerce and Industries of Cortes, the state surrounding San Pedro Sula.

In a sign of money laundering, he said, unknown companies are winning bids “on huge infrastructure projects, like highways and bridges, and no one knows where the money is coming from.”

Unlike other parts of Central America, where organized crime has relied on enforcers recruited from street gangs and unemployed youth, in Honduras entire units of the national police appear to work for drug and crime groups, preying on the public and gunning down foes.

Worries about worsening crime have rippled to Washington, which pulled all 158 Peace Corps volunteers out of Honduras this month to evaluate security.

Distress at corruption in the national police, which was a branch of the military until 1998, has grown so acute that Honduras’ Congress agreed on Nov. 29 to a request from President Porfirio Lobo to deploy soldiers against drug cartels, giving them full powers to make arrests, conduct searches and execute warrants.

A former chief of internal affairs for the national police, Maria Luisa Borjas, said rival criminal groups entrenched in the force battled each other for dominance.

“Right now, there are two cartels fighting it out within the police,” she said, adding that a purge of the force that Lobo announced last fall is only “cosmetic.”

“The officers they are removing now aren’t the really corrupt ones,” she added.

Street cops earn an average of $330 a month but police commanders often enjoy great wealth. Some own restaurants and others operate fleets of trucks as sideline businesses.

“You find police who are living in grand houses and driving cars that ordinary people could never own,” said Arnulfo Aguilar, the director of Radio Uno, a news station here.

Alleged rot in the 14,913-member national police grabbed headlines last September when then-Public Security Minister Oscar Alvarez said that at least 20 police commanders were part of drug cartels. Some of them, he said, were tasked with guiding in drug-laden aircraft from South America. Alvarez was ousted days later.

It was the police slaying of two university students on Oct. 22, though, that ignited deeper outrage. One of the victims was the 22-year-old son of Dr. Julieta Castellanos, a former member of the National Truth and Reconciliation Commission, which probed the country’s 2009 coup, and the dean of the National Autonomous University of Honduras, the nation’s largest.

Backed by forensic investigators, Castellanos and her supporters pieced together how a police unit fired at the car as the two students returned from a party, then dumped the bodies on the outskirts of Tegucigalpa.

The dean’s demand that Lobo send the killers to trial and conduct a deep purge of the police emboldened another grieving victim.

The widow of retired army Gen. Julian Aristides Gonzalez, Leslie Portillo told a television station in early December that police riding a motorcycle carried out the 2009 execution of her husband, the nation’s top counter-drug official.

Portillo obtained information that “the motorcycle that was used later was ridden into a police precinct,” Castellanos said in an interview.

Castellanos, a sociologist, said many Hondurans viewed police corruption as a litmus test of whether the state could stave off an onslaught of gangsters.

“People are really indignant, worried, but above all frightened. If nothing happens, if the police are not purged, where is the country headed?” she asked. “Who will be governing in a few years?”

U.S. diplomats fret. The top diplomat for Latin America, Roberta S. Jacobson, noted in a speech Dec. 1 that 95 percent of the illicit drugs that go from South America to the United States pass through Central America.

Jacobson, who’s awaiting Senate confirmation as the assistant secretary of state for Western Hemisphere affairs, said the rise in crime had taken its highest toll on Central America’s poorest.

“It is tempting to retreat behind high walls and hire private security guards, and often there’s a perception that the well-off suffer the most in security costs, threat of kidnappings or forgone investment. But in fact, it is the poor and middle class that suffer the most,” she said.

Jacobson said those without resources had no recourse when police and courts didn’t offer protection or justice.

The vulnerability of the poor to organized crime is particularly apparent in neighboring Guatemala, where President Otto Perez Molina, a former army intelligence chief, came to office earlier this month on a law and order platform.

The crime wave is taking an enormous economic toll in Central America. The Inter-American Development Bank put the price tag at $6.5 billion, about 8 percent of the region’s economic output.